Like everyone else, elite investors make mistakes. Some of their top consensus picks, such as Amazon, Facebook and Alibaba, have not done well in Q4 due to various reasons. Nevertheless, the data show elite investors’ consensus picks have done well on average over the long-term. The top 15 S&P 500 stocks among hedge funds at the end of September 2018 returned an average of 1% through March 15th whereas the S&P 500 Index ETF lost 2.2% during the same period. Because their consensus picks have done well, we pay attention to what elite funds think before doing extensive research on a stock. In this article, we take a closer look at Seritage Growth Properties (NYSE:SRG) from the perspective of those elite funds.

Hedge fund interest in Seritage Growth Properties (NYSE:SRG) shares was flat at the end of last quarter. This is usually a negative indicator. The level and the change in hedge fund popularity aren’t the only variables you need to analyze to decipher hedge funds’ perspectives. A stock may witness a boost in popularity but it may still be less popular than similarly priced stocks. That’s why at the end of this article we will examine companies such as Matador Resources Co (NYSE:MTDR), CONMED Corporation (NASDAQ:CNMD), and Ares Management Corporation (NYSE:ARES) to gather more data points.

How have hedgies been trading Seritage Growth Properties (NYSE:SRG)?

Heading into the first quarter of 2019, a total of 14 of the hedge funds tracked by Insider Monkey held long positions in this stock, a change of 0% from the previous quarter. Below, you can check out the change in hedge fund sentiment towards SRG over the last 14 quarters. So, let’s find out which hedge funds were among the top holders of the stock and which hedge funds were making big moves. 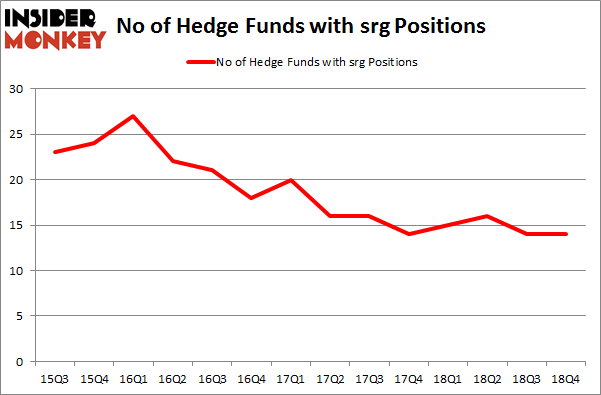 The largest stake in Seritage Growth Properties (NYSE:SRG) was held by BloombergSen, which reported holding $87.6 million worth of stock at the end of September. It was followed by Empyrean Capital Partners with a $78.3 million position. Other investors bullish on the company included EMS Capital, Gates Capital Management, and Governors Lane.

Seeing as Seritage Growth Properties (NYSE:SRG) has experienced a decline in interest from the aggregate hedge fund industry, it’s safe to say that there exists a select few funds who were dropping their entire stakes by the end of the third quarter. Intriguingly, Israel Englander’s Millennium Management said goodbye to the largest investment of the “upper crust” of funds monitored by Insider Monkey, comprising about $10.5 million in call options. Matthew Hulsizer’s fund, PEAK6 Capital Management, also cut its call options, about $0.3 million worth. These moves are important to note, as aggregate hedge fund interest stayed the same (this is a bearish signal in our experience).

As you can see these stocks had an average of 13.75 hedge funds with bullish positions and the average amount invested in these stocks was $162 million. That figure was $355 million in SRG’s case. CONMED Corporation (NASDAQ:CNMD) is the most popular stock in this table. On the other hand Capitol Federal Financial, Inc. (NASDAQ:CFFN) is the least popular one with only 9 bullish hedge fund positions. Seritage Growth Properties (NYSE:SRG) is not the most popular stock in this group but hedge fund interest is still above average. Our calculations showed that top 15 most popular stocks) among hedge funds returned 24.2% through April 22nd and outperformed the S&P 500 ETF (SPY) by more than 7 percentage points. Hedge funds were also right about betting on SRG as the stock returned 33.1% and outperformed the market by an even larger margin. Hedge funds were rewarded for their relative bullishness.