Hedge fund managers like David Einhorn, Bill Ackman, or Carl Icahn became billionaires through reaping large profits for their investors, which is why piggybacking their stock picks may provide us with significant returns as well. Many hedge funds, like Paul Singer’s Elliott Management, are pretty secretive, but we can still get some insights by analyzing their quarterly 13F filings. One of the most fertile grounds for large abnormal returns is hedge funds’ most popular small-cap picks, which are not so widely followed and often trade at a discount to their intrinsic value. In this article we will check out hedge fund activity in another small-cap stock: Semiconductor Manufacturing International Corporation (NYSE:SMI).

Semiconductor Manufacturing International Corporation (NYSE:SMI) was in 4 hedge funds’ portfolios at the end of December. SMI has seen a decrease in support from the world’s most elite money managers in recent months. There were 5 hedge funds in our database with SMI positions at the end of the previous quarter. Our calculations also showed that SMI isn’t among the 30 most popular stocks among hedge funds.

According to most shareholders, hedge funds are assumed to be slow, old investment vehicles of yesteryear. While there are over 8000 funds in operation at the moment, We choose to focus on the crème de la crème of this club, around 750 funds. It is estimated that this group of investors administer the majority of the hedge fund industry’s total capital, and by keeping track of their matchless investments, Insider Monkey has found several investment strategies that have historically surpassed the S&P 500 index. Insider Monkey’s flagship hedge fund strategy exceeded the S&P 500 index by nearly 5 percentage points per year since its inception in May 2014 through early November 2018. We were able to generate large returns even by identifying short candidates. Our portfolio of short stocks lost 27.5% since February 2017 (through March 12th) even though the market was up nearly 25% during the same period. We just shared a list of 6 short targets in our latest quarterly update and they are already down an average of 6% in less than a month.

What have hedge funds been doing with Semiconductor Manufacturing International Corporation (NYSE:SMI)?

Heading into the first quarter of 2019, a total of 4 of the hedge funds tracked by Insider Monkey held long positions in this stock, a change of -20% from the previous quarter. On the other hand, there were a total of 3 hedge funds with a bullish position in SMI a year ago. With the smart money’s capital changing hands, there exists a few key hedge fund managers who were boosting their holdings significantly (or already accumulated large positions). 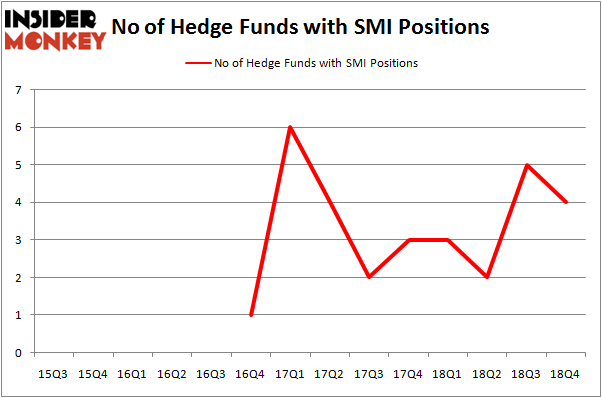 When looking at the institutional investors followed by Insider Monkey, Jim Simons’s Renaissance Technologies has the largest position in Semiconductor Manufacturing International Corporation (NYSE:SMI), worth close to $5.3 million, comprising less than 0.1%% of its total 13F portfolio. Coming in second is D. E. Shaw of D E Shaw, with a $0.7 million position; less than 0.1%% of its 13F portfolio is allocated to the stock. Remaining hedge funds and institutional investors with similar optimism include Israel Englander’s Millennium Management, Warren Lammert’s Granite Point Capital and .

We view hedge fund activity in the stock unfavorable, but in this case there was only a single hedge fund selling its entire position: Highbridge Capital Management. One hedge fund selling its entire position doesn’t always imply a bearish intent. Theoretically a hedge fund may decide to sell a promising position in order to invest the proceeds in a more promising idea. However, we don’t think this is the case in this case because none of the 700+ hedge funds tracked by Insider Monkey identified SMI as a viable investment and initiated a position in the stock.

As you can see these stocks had an average of 24.5 hedge funds with bullish positions and the average amount invested in these stocks was $390 million. That figure was $7 million in SMI’s case. Pivotal Software, Inc. (NYSE:PVTL) is the most popular stock in this table. On the other hand Kemper Corporation (NYSE:KMPR) is the least popular one with only 15 bullish hedge fund positions. Compared to these stocks Semiconductor Manufacturing International Corporation (NYSE:SMI) is even less popular than KMPR. Hedge funds clearly dropped the ball on SMI as the stock delivered strong returns, though hedge funds’ consensus picks still generated respectable returns. Our calculations showed that top 15 most popular stocks) among hedge funds returned 24.2% through April 22nd and outperformed the S&P 500 ETF (SPY) by more than 7 percentage points. A small number of hedge funds were also right about betting on SMI as the stock returned 24.5% and outperformed the market by an even larger margin.