Did Hedge Funds Drop The Ball On Sea Limited (SE) ?

Sea Limited (NYSE:SE) investors should pay attention to a decrease in enthusiasm from smart money lately. Our calculations also showed that SE isn’t among the 30 most popular stocks among hedge funds. 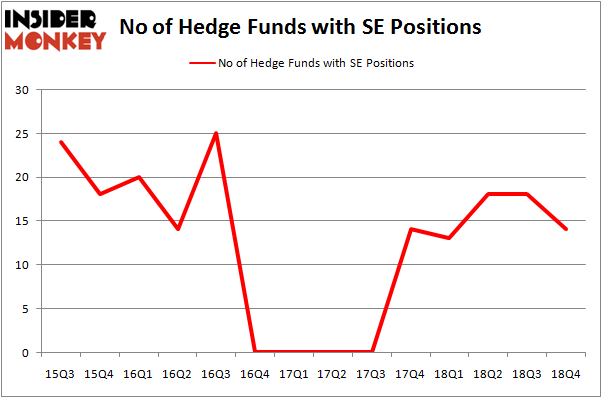 When looking at the institutional investors followed by Insider Monkey, Tiger Global Management LLC, managed by Chase Coleman, holds the number one position in Sea Limited (NYSE:SE). Tiger Global Management LLC has a $139.2 million position in the stock, comprising 0.9% of its 13F portfolio. The second most bullish fund manager is Stephen Mandel of Lone Pine Capital, with a $44.9 million position; 0.3% of its 13F portfolio is allocated to the company. Remaining members of the smart money that are bullish consist of Nitin Saigal and Dan Jacobs’s Kora Management, Panayotis Takis Sparaggis’s Alkeon Capital Management and Kevin D. Eng’s Columbus Hill Capital Management.

Judging by the fact that Sea Limited (NYSE:SE) has faced falling interest from the smart money, logic holds that there was a specific group of hedgies who were dropping their positions entirely heading into Q3. At the top of the heap, Daniel S. Och’s OZ Management dropped the biggest position of the 700 funds followed by Insider Monkey, comprising an estimated $38.6 million in stock. Bain Capital’s fund, Brookside Capital, also said goodbye to its stock, about $9.7 million worth. These transactions are interesting, as total hedge fund interest dropped by 4 funds heading into Q3.

As you can see these stocks had an average of 19.25 hedge funds with bullish positions and the average amount invested in these stocks was $318 million. That figure was $335 million in SE’s case. MGIC Investment Corporation (NYSE:MTG) is the most popular stock in this table. On the other hand AU Optronics Corp. (NYSE:AUO) is the least popular one with only 9 bullish hedge fund positions. Sea Limited (NYSE:SE) is not the least popular stock in this group but hedge fund interest is still below average. Our calculations showed that top 15 most popular stocks) among hedge funds returned 24.2% through April 22nd and outperformed the S&P 500 ETF (SPY) by more than 7 percentage points. A small number of hedge funds were also right about betting on SE as the stock returned 109.2% and outperformed the market by an even larger margin.