After several tireless days we have finished crunching the numbers from nearly 750 13F filings issued by the elite hedge funds and other investment firms that we track at Insider Monkey, which disclosed those firms’ equity portfolios as of September 30th. The results of that effort will be put on display in this article, as we share valuable insight into the smart money sentiment towards Rush Enterprises, Inc. (NASDAQ:RUSHA).

Hedge fund interest in Rush Enterprises, Inc. (NASDAQ:RUSHA) shares was flat at the end of last quarter. This is usually a negative indicator. At the end of this article we will also compare RUSHA to other stocks including GCP Applied Technologies Inc. (NYSE:GCP), Rent-A-Center Inc (NASDAQ:RCII), and TPG Specialty Lending Inc (NYSE:TSLX) to get a better sense of its popularity.

Unlike the largest US hedge funds that are convinced Dow will soar past 40,000 or the world’s most bearish hedge fund that’s more convinced than ever that a crash is coming, our long-short investment strategy doesn’t rely on bull or bear markets to deliver double digit returns. We only rely on the best performing hedge funds‘ buy/sell signals. We’re going to take a glance at the fresh hedge fund action regarding Rush Enterprises, Inc. (NASDAQ:RUSHA).

What does smart money think about Rush Enterprises, Inc. (NASDAQ:RUSHA)?

At the end of the third quarter, a total of 20 of the hedge funds tracked by Insider Monkey were long this stock, a change of 0% from one quarter earlier. Below, you can check out the change in hedge fund sentiment towards RUSHA over the last 17 quarters. So, let’s examine which hedge funds were among the top holders of the stock and which hedge funds were making big moves. 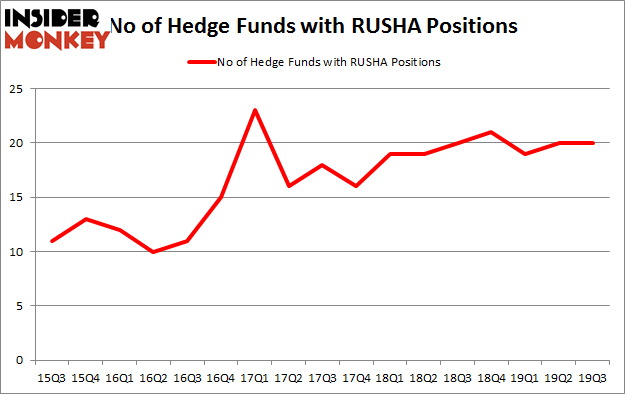 Among these funds, Renaissance Technologies held the most valuable stake in Rush Enterprises, Inc. (NASDAQ:RUSHA), which was worth $26.5 million at the end of the third quarter. On the second spot was First Pacific Advisors which amassed $5.6 million worth of shares. Citadel Investment Group, Prescott Group Capital Management, and Millennium Management were also very fond of the stock, becoming one of the largest hedge fund holders of the company. In terms of the portfolio weights assigned to each position Prescott Group Capital Management allocated the biggest weight to Rush Enterprises, Inc. (NASDAQ:RUSHA), around 1.31% of its 13F portfolio. Zebra Capital Management is also relatively very bullish on the stock, dishing out 0.72 percent of its 13F equity portfolio to RUSHA.

Judging by the fact that Rush Enterprises, Inc. (NASDAQ:RUSHA) has faced declining sentiment from hedge fund managers, logic holds that there exists a select few fund managers who were dropping their positions entirely in the third quarter. Interestingly, Peter S. Park’s Park West Asset Management sold off the largest stake of the 750 funds tracked by Insider Monkey, comprising about $7.5 million in stock, and Donald Sussman’s Paloma Partners was right behind this move, as the fund dropped about $0.7 million worth. These transactions are intriguing to say the least, as aggregate hedge fund interest stayed the same (this is a bearish signal in our experience).

As you can see these stocks had an average of 16.75 hedge funds with bullish positions and the average amount invested in these stocks was $251 million. That figure was $64 million in RUSHA’s case. Rent-A-Center Inc (NASDAQ:RCII) is the most popular stock in this table. On the other hand TPG Specialty Lending Inc (NYSE:TSLX) is the least popular one with only 8 bullish hedge fund positions. Rush Enterprises, Inc. (NASDAQ:RUSHA) is not the most popular stock in this group but hedge fund interest is still above average. Our calculations showed that top 20 most popular stocks among hedge funds returned 37.4% in 2019 through the end of November and outperformed the S&P 500 ETF (SPY) by 9.9 percentage points. Hedge funds were also right about betting on RUSHA as the stock returned 19.1% during the fourth quarter (through the end of November) and outperformed the market. Hedge funds were rewarded for their relative bullishness.