Hedge funds and large money managers usually invest with a focus on the long-term horizon and, therefore, short-lived dips on the charts, usually don’t make them change their opinion towards a company. This time it may be different. During the fourth quarter of 2018 we observed increased volatility and small-cap stocks underperformed the market. Hedge fund investor letters indicated that they are cutting their overall exposure, closing out some position and doubling down on others. Let’s take a look at the hedge fund sentiment towards Rite Aid Corporation (NYSE:RAD) to find out whether it was one of their high conviction long-term ideas.

Is Rite Aid Corporation (NYSE:RAD) a buy here? Hedge funds are becoming less hopeful. The number of bullish hedge fund bets dropped by 5 recently. Our calculations also showed that RAD isn’t among the 30 most popular stocks among hedge funds.

What does the smart money think about Rite Aid Corporation (NYSE:RAD)?

Heading into the first quarter of 2019, a total of 13 of the hedge funds tracked by Insider Monkey were bullish on this stock, a change of -28% from the second quarter of 2018. Below, you can check out the change in hedge fund sentiment towards RAD over the last 14 quarters. With the smart money’s positions undergoing their usual ebb and flow, there exists a select group of noteworthy hedge fund managers who were adding to their stakes substantially (or already accumulated large positions). 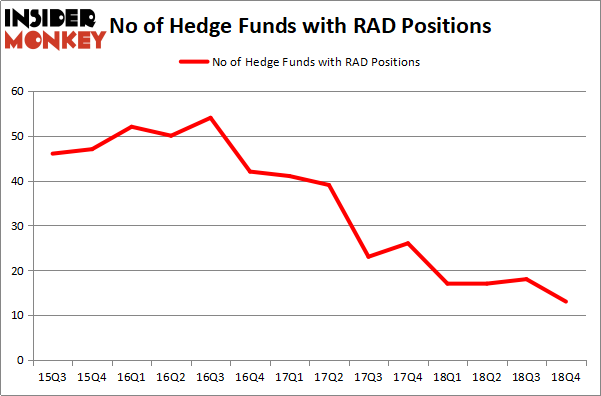 Among these funds, Highfields Capital Management held the most valuable stake in Rite Aid Corporation (NYSE:RAD), which was worth $21.6 million at the end of the fourth quarter. On the second spot was Adage Capital Management which amassed $4.3 million worth of shares. Moreover, Arrowstreet Capital, GAMCO Investors, and Balyasny Asset Management were also bullish on Rite Aid Corporation (NYSE:RAD), allocating a large percentage of their portfolios to this stock.

Due to the fact that Rite Aid Corporation (NYSE:RAD) has witnessed declining sentiment from hedge fund managers, it’s easy to see that there were a few hedge funds that slashed their positions entirely by the end of the third quarter. It’s worth mentioning that Benjamin A. Smith’s Laurion Capital Management dumped the biggest position of the 700 funds monitored by Insider Monkey, totaling close to $1.1 million in stock, and Douglas Dethy’s DC Capital Partners was right behind this move, as the fund sold off about $1 million worth. These moves are intriguing to say the least, as aggregate hedge fund interest fell by 5 funds by the end of the third quarter.

As you can see these stocks had an average of 12.25 hedge funds with bullish positions and the average amount invested in these stocks was $149 million. That figure was $33 million in RAD’s case. Vericel Corp (NASDAQ:VCEL) is the most popular stock in this table. On the other hand Golar LNG Partners LP (NASDAQ:GMLP) is the least popular one with only 4 bullish hedge fund positions. Rite Aid Corporation (NYSE:RAD) is not the most popular stock in this group but hedge fund interest is still above average. Our calculations showed that top 15 most popular stocks) among hedge funds returned 24.2% through April 22nd and outperformed the S&P 500 ETF (SPY) by more than 7 percentage points. Hedge funds were also right about betting on RAD as the stock returned 1414.1% and outperformed the market by an even larger margin. Hedge funds were rewarded for their relative bullishness.

Is Mesa Laboratories, Inc. (MLAB) A Good Stock To Buy?
Monthly Newsletter Strategy
Download a free copy of our newsletter and see the details inside!
Hedge Fund Resource Center
Related News
Is Rite Aid Corporation (RAD) Going to Burn These Hedge Funds? Wondering What’s Happening in the Financial Markets Today? Take a Look at These 34 Stories! 32 Major Stories Summarizing What’s Happening in the World of Finance Today This Is What You Should Know About The Financial Markets Today What Is Going On In The Financial Markets Today? Why Rite Aid Corporation (NYSE:RAD) Shares Are Surging Here’s Why Goldman Sachs, Rite Aid, Teck Resources, Freeport-McMoRan, and More are in the Spotlight 18 Cute Tinder Bio Examples (Female) 20 Clever Bumble Bios for Guys 15 Most Physically Demanding Olympic Sports
Billionaire Hedge Funds