Looking for stocks with high upside potential? Just follow the big players within the hedge fund industry. Why should you do so? Let’s take a brief look at what statistics have to say about hedge funds’ stock picking abilities to illustrate. The Standard and Poor’s 500 Index returned approximately 13.1% in the 2.5 months of 2019 (including dividend payments). Conversely, hedge funds’ 15 preferred S&P 500 stocks generated a return of 19.7% during the same period, with 93% of these stock picks outperforming the broader market benchmark. Coincidence? It might happen to be so, but it is unlikely. Our research covering the last 18 years indicates that hedge funds’ stock picks generate superior risk-adjusted returns. That’s why we believe it is wise to check hedge fund activity before you invest your time or your savings on a stock like RISE Education Cayman Ltd (NASDAQ:REDU).

RISE Education Cayman Ltd (NASDAQ:REDU) investors should pay attention to a decrease in activity from the world’s largest hedge funds lately. REDU was in 4 hedge funds’ portfolios at the end of the fourth quarter of 2018. There were 5 hedge funds in our database with REDU holdings at the end of the previous quarter. Our calculations also showed that redu isn’t among the 30 most popular stocks among hedge funds.

What does the smart money think about RISE Education Cayman Ltd (NASDAQ:REDU)?

At Q4’s end, a total of 4 of the hedge funds tracked by Insider Monkey were long this stock, a change of -20% from the previous quarter. On the other hand, there were a total of 5 hedge funds with a bullish position in REDU a year ago. With hedgies’ positions undergoing their usual ebb and flow, there exists a few noteworthy hedge fund managers who were increasing their stakes considerably (or already accumulated large positions). 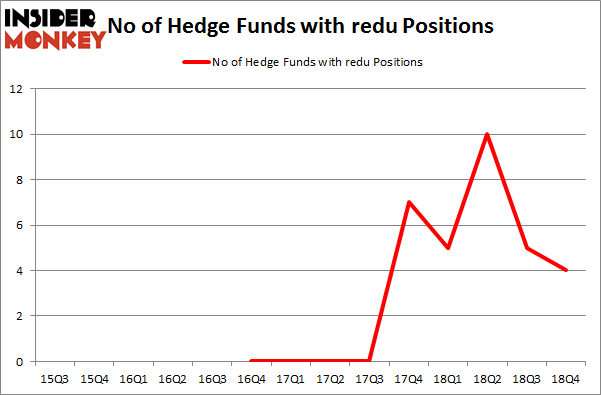 According to Insider Monkey’s hedge fund database, Tiger Global Management LLC, managed by Chase Coleman, holds the biggest position in RISE Education Cayman Ltd (NASDAQ:REDU). Tiger Global Management LLC has a $4 million position in the stock, comprising less than 0.1%% of its 13F portfolio. Sitting at the No. 2 spot is Indus Capital, led by David Kowitz and Sheldon Kasowitz, holding a $2.7 million position; 0.5% of its 13F portfolio is allocated to the company. Some other professional money managers that hold long positions encompass James Dinan’s York Capital Management, Benjamin A. Smith’s Laurion Capital Management and .

We view hedge fund activity in the stock unfavorable, but in this case there was only a single hedge fund selling its entire position: Millennium Management. One hedge fund selling its entire position doesn’t always imply a bearish intent. Theoretically a hedge fund may decide to sell a promising position in order to invest the proceeds in a more promising idea. However, we don’t think this is the case in this case because none of the 700+ hedge funds tracked by Insider Monkey identified REDU as a viable investment and initiated a position in the stock.

As you can see these stocks had an average of 12.75 hedge funds with bullish positions and the average amount invested in these stocks was $58 million. That figure was $9 million in REDU’s case. Mobileiron Inc (NASDAQ:MOBL) is the most popular stock in this table. On the other hand Sierra Wireless, Inc. (NASDAQ:SWIR) is the least popular one with only 10 bullish hedge fund positions. Compared to these stocks RISE Education Cayman Ltd (NASDAQ:REDU) is even less popular than SWIR. Hedge funds clearly dropped the ball on REDU as the stock delivered strong returns, though hedge funds’ consensus picks still generated respectable returns. Our calculations showed that top 15 most popular stocks) among hedge funds returned 24.2% through April 22nd and outperformed the S&P 500 ETF (SPY) by more than 7 percentage points. A small number of hedge funds were also right about betting on REDU as the stock returned 28.3% and outperformed the market by an even larger margin.