We know that hedge funds generate strong, risk-adjusted returns over the long run, therefore imitating the picks that they are collectively bullish on can be a profitable strategy for retail investors. With billions of dollars in assets, smart money investors have to conduct complex analyses, spend many resources and use tools that are not always available for the general crowd. This doesn’t mean that they don’t have occasional colossal losses; they do (like Peltz’s recent General Electric losses). However, it is still a good idea to keep an eye on hedge fund activity. With this in mind, as the current round of 13F filings has just ended, let’s examine the smart money sentiment towards Rayonier Advanced Materials Inc (NYSE:RYAM).

Rayonier Advanced Materials Inc (NYSE:RYAM) shareholders have witnessed a decrease in support from the world’s most elite money managers recently. Our calculations also showed that ryam isn’t among the 30 most popular stocks among hedge funds.

At Q4’s end, a total of 19 of the hedge funds tracked by Insider Monkey held long positions in this stock, a change of -17% from the second quarter of 2018. The graph below displays the number of hedge funds with bullish position in RYAM over the last 14 quarters. With hedgies’ sentiment swirling, there exists an “upper tier” of noteworthy hedge fund managers who were upping their stakes substantially (or already accumulated large positions). 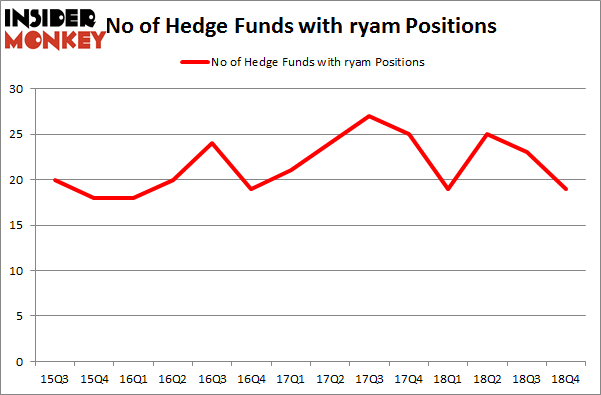 Since Rayonier Advanced Materials Inc (NYSE:RYAM) has experienced falling interest from the entirety of the hedge funds we track, logic holds that there is a sect of fund managers that elected to cut their full holdings in the third quarter. At the top of the heap, David Rosen’s Rubric Capital Management dumped the largest stake of the “upper crust” of funds followed by Insider Monkey, comprising an estimated $11.4 million in stock, and George McCabe’s Portolan Capital Management was right behind this move, as the fund sold off about $5.8 million worth. These transactions are intriguing to say the least, as total hedge fund interest fell by 4 funds in the third quarter.

As you can see these stocks had an average of 12.25 hedge funds with bullish positions and the average amount invested in these stocks was $95 million. That figure was $103 million in RYAM’s case. United Natural Foods, Inc. (NYSE:UNFI) is the most popular stock in this table. On the other hand Sabine Royalty Trust (NYSE:SBR) is the least popular one with only 6 bullish hedge fund positions. Compared to these stocks Rayonier Advanced Materials Inc (NYSE:RYAM) is more popular among hedge funds. Our calculations showed that top 15 most popular stocks) among hedge funds returned 24.2% through April 22nd and outperformed the S&P 500 ETF (SPY) by more than 7 percentage points. Hedge funds were also right about betting on RYAM as the stock returned 38% and outperformed the market by an even larger margin. Hedge funds were clearly right about piling into this stock relative to other stocks with similar market capitalizations.

Here’s What Hedge Funds Think About Intra-Cellular Therapies Inc (ITCI...
Monthly Newsletter Strategy
Download a free copy of our newsletter and see the details inside!
Hedge Fund Resource Center
Related News
Hedge Funds Are Dumping Rayonier Advanced Materials Inc (RYAM) 3 Stocks With Insanely Low P/S Ratios That Hedge Funds Are Bullish On Three Moves by Activist Marcato Capital You Should Pay Attention To 33 Fresh Stories From The World Of Finance Today Rayonier Advanced Materials Inc (RYAM): Are Hedge Funds Right About This Stock? Why These Five Stocks Are on the Move Today? What Is Going On With These Falling Stocks? 25 Cities with the Most Unfaithful Wives 6 Easiest Programming Languages for Middle School Students 18 Cute Tinder Bio Examples (Female)
Billionaire Hedge Funds