Hedge Funds and other institutional investors have just completed filing their 13Fs with the Securities and Exchange Commission, revealing their equity portfolios as of the end of December. At Insider Monkey, we follow nearly 750 active hedge funds and notable investors and by analyzing their 13F filings, we can determine the stocks that they are collectively bullish on. One of their picks is Progress Software Corporation (NASDAQ:PRGS), so let’s take a closer look at the sentiment that surrounds it in the current quarter.

Progress Software Corporation (NASDAQ:PRGS) has experienced a decrease in support from the world’s most elite money managers lately. PRGS was in 22 hedge funds’ portfolios at the end of the fourth quarter of 2018. There were 24 hedge funds in our database with PRGS holdings at the end of the previous quarter. Our calculations also showed that PRGS isn’t among the 30 most popular stocks among hedge funds.

What have hedge funds been doing with Progress Software Corporation (NASDAQ:PRGS)?

Heading into the first quarter of 2019, a total of 22 of the hedge funds tracked by Insider Monkey were bullish on this stock, a change of -8% from the second quarter of 2018. The graph below displays the number of hedge funds with bullish position in PRGS over the last 14 quarters. With hedgies’ positions undergoing their usual ebb and flow, there exists a few notable hedge fund managers who were adding to their holdings significantly (or already accumulated large positions). 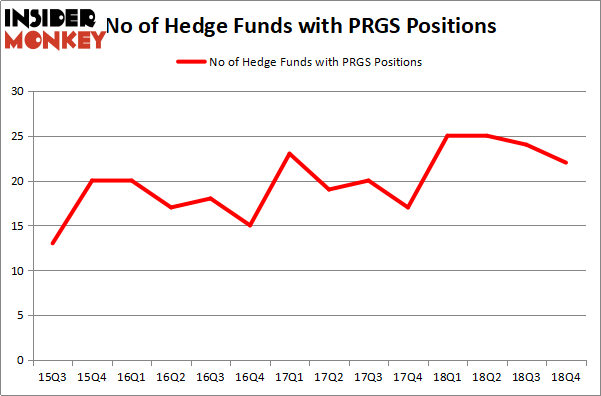 According to publicly available hedge fund and institutional investor holdings data compiled by Insider Monkey, Praesidium Investment Management Company, managed by Kevin Oram and Peter Uddo, holds the most valuable position in Progress Software Corporation (NASDAQ:PRGS). Praesidium Investment Management Company has a $42 million position in the stock, comprising 3.5% of its 13F portfolio. Sitting at the No. 2 spot is Renaissance Technologies, led by Jim Simons, holding a $41.3 million position; less than 0.1%% of its 13F portfolio is allocated to the stock. Some other members of the smart money with similar optimism encompass Ken Fisher’s Fisher Asset Management, Noam Gottesman’s GLG Partners and Paul Marshall and Ian Wace’s Marshall Wace LLP.

Since Progress Software Corporation (NASDAQ:PRGS) has witnessed falling interest from the aggregate hedge fund industry, it’s safe to say that there is a sect of hedge funds who were dropping their full holdings heading into Q3. Interestingly, Peter Rathjens, Bruce Clarke and John Campbell’s Arrowstreet Capital dropped the largest stake of all the hedgies watched by Insider Monkey, comprising close to $10.5 million in call options, and Matthew Hulsizer’s PEAK6 Capital Management was right behind this move, as the fund dropped about $1.5 million worth. These transactions are interesting, as aggregate hedge fund interest dropped by 2 funds heading into Q3.

As you can see these stocks had an average of 8.75 hedge funds with bullish positions and the average amount invested in these stocks was $54 million. That figure was $243 million in PRGS’s case. M.D.C. Holdings, Inc. (NYSE:MDC) is the most popular stock in this table. On the other hand Grupo Simec S.A.B. de C.V. (NYSEAMEX:SIM) is the least popular one with only 1 bullish hedge fund positions. Compared to these stocks Progress Software Corporation (NASDAQ:PRGS) is more popular among hedge funds. Our calculations showed that top 15 most popular stocks) among hedge funds returned 24.2% through April 22nd and outperformed the S&P 500 ETF (SPY) by more than 7 percentage points. Hedge funds were also right about betting on PRGS as the stock returned 28% and outperformed the market by an even larger margin. Hedge funds were clearly right about piling into this stock relative to other stocks with similar market capitalizations.