Did Hedge Funds Drop The Ball On Presidio, Inc. (PSDO) ?

The elite funds run by legendary investors such as David Tepper and Dan Loeb make hundreds of millions of dollars for themselves and their investors by spending enormous resources doing research on small cap stocks that big investment banks don’t follow. Because of their pay structures, they have strong incentives to do the research necessary to beat the market. That’s why we pay close attention to what they think in small cap stocks. In this article, we take a closer look at Presidio, Inc. (NASDAQ:PSDO) from the perspective of those elite funds.

Presidio, Inc. (NASDAQ:PSDO) was in 19 hedge funds’ portfolios at the end of the second quarter of 2019. PSDO investors should be aware of a decrease in enthusiasm from smart money of late. There were 25 hedge funds in our database with PSDO positions at the end of the previous quarter. Our calculations also showed that PSDO isn’t among the 30 most popular stocks among hedge funds (see the video below).

Unlike former hedge manager, Dr. Steve Sjuggerud, who is convinced Dow will soar past 40000, our long-short investment strategy doesn’t rely on bull markets to deliver double digit returns. We only rely on hedge fund buy/sell signals. We’re going to check out the fresh hedge fund action regarding Presidio, Inc. (NASDAQ:PSDO).

What have hedge funds been doing with Presidio, Inc. (NASDAQ:PSDO)?

At the end of the second quarter, a total of 19 of the hedge funds tracked by Insider Monkey held long positions in this stock, a change of -24% from the first quarter of 2019. Below, you can check out the change in hedge fund sentiment towards PSDO over the last 16 quarters. With hedgies’ sentiment swirling, there exists an “upper tier” of notable hedge fund managers who were adding to their stakes substantially (or already accumulated large positions). 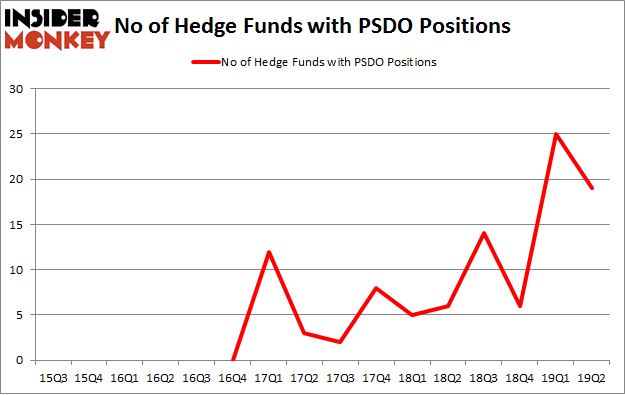 Of the funds tracked by Insider Monkey, Peter Rathjens, Bruce Clarke and John Campbell’s Arrowstreet Capital has the largest position in Presidio, Inc. (NASDAQ:PSDO), worth close to $12.1 million, amounting to less than 0.1%% of its total 13F portfolio. The second most bullish fund manager is Marshall Wace LLP, led by Paul Marshall and Ian Wace, holding a $5.3 million position; less than 0.1%% of its 13F portfolio is allocated to the stock. Some other peers that hold long positions encompass D. E. Shaw’s D E Shaw, Joseph Samuels’s Islet Management and Renaissance Technologies.

Since Presidio, Inc. (NASDAQ:PSDO) has experienced a decline in interest from the entirety of the hedge funds we track, we can see that there lies a certain “tier” of hedge funds who sold off their entire stakes last quarter. Intriguingly, Jonathan Barrett and Paul Segal’s Luminus Management cut the largest stake of the 750 funds followed by Insider Monkey, totaling close to $7.8 million in stock. Andrew Feldstein and Stephen Siderow’s fund, Blue Mountain Capital, also dropped its stock, about $3 million worth. These moves are intriguing to say the least, as aggregate hedge fund interest fell by 6 funds last quarter.

As you can see these stocks had an average of 15 hedge funds with bullish positions and the average amount invested in these stocks was $111 million. That figure was $34 million in PSDO’s case. Wesco Aircraft Holdings Inc (NYSE:WAIR) is the most popular stock in this table. On the other hand Boise Cascade Company (NYSE:BCC) is the least popular one with only 11 bullish hedge fund positions. Presidio, Inc. (NASDAQ:PSDO) is not the most popular stock in this group but hedge fund interest is still above average. Our calculations showed that top 20 most popular stocks among hedge funds returned 24.4% in 2019 through September 30th and outperformed the S&P 500 ETF (SPY) by 4 percentage points. Hedge funds were also right about betting on PSDO as the stock returned 23.9% during the third quarter and outperformed the market. Hedge funds were rewarded for their relative bullishness.