The fourth quarter was a rough one for most investors, as fears of a rising interest rate environment in the U.S, a trade war with China, and a more or less stagnant Europe, weighed heavily on the minds of investors. Both the S&P 500 and Russell 2000 sank as a result, with the Russell 2000, which is composed of smaller companies, being hit especially hard. This was primarily due to hedge funds, which are big supporters of small-cap stocks, pulling some of their capital out of the volatile markets during this time. Let’s look at how this market volatility affected the sentiment of hedge funds towards Post Holdings Inc (NYSE:POST), and what that likely means for the prospects of the company and its stock.

Is Post Holdings Inc (NYSE:POST) the right pick for your portfolio? Investors who are in the know are becoming less confident. The number of bullish hedge fund positions fell by 1 recently. Our calculations also showed that POST isn’t among the 30 most popular stocks among hedge funds.

In the eyes of most shareholders, hedge funds are perceived as underperforming, outdated financial tools of yesteryear. While there are more than 8000 funds with their doors open today, Our experts look at the crème de la crème of this group, about 750 funds. Most estimates calculate that this group of people have their hands on most of the hedge fund industry’s total capital, and by following their first-class equity investments, Insider Monkey has deciphered numerous investment strategies that have historically outpaced the S&P 500 index. Insider Monkey’s flagship hedge fund strategy exceeded the S&P 500 index by nearly 5 percentage points annually since its inception in May 2014 through early November 2018. We were able to generate large returns even by identifying short candidates. Our portfolio of short stocks lost 27.5% since February 2017 (through March 12th) even though the market was up nearly 25% during the same period. We just shared a list of 6 short targets in our latest quarterly update and they are already down an average of 6% in less than a month. 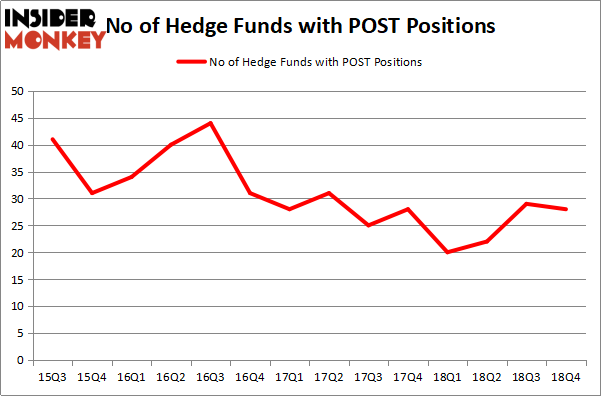 The largest stake in Post Holdings Inc (NYSE:POST) was held by Route One Investment Company, which reported holding $519 million worth of stock at the end of September. It was followed by Iridian Asset Management with a $183.6 million position. Other investors bullish on the company included Diamond Hill Capital, Levin Capital Strategies, and Renaissance Technologies.

Judging by the fact that Post Holdings Inc (NYSE:POST) has faced a decline in interest from the smart money, we can see that there lies a certain “tier” of hedgies who were dropping their entire stakes by the end of the third quarter. At the top of the heap, Joel Ramin’s 12 West Capital Management said goodbye to the biggest position of the 700 funds watched by Insider Monkey, comprising about $69.3 million in stock, and John Osterweis’s Osterweis Capital Management was right behind this move, as the fund dumped about $24.8 million worth. These bearish behaviors are intriguing to say the least, as total hedge fund interest was cut by 1 funds by the end of the third quarter.

As you can see these stocks had an average of 21 hedge funds with bullish positions and the average amount invested in these stocks was $512 million. That figure was $1337 million in POST’s case. Cimarex Energy Co (NYSE:XEC) is the most popular stock in this table. On the other hand AptarGroup, Inc. (NYSE:ATR) is the least popular one with only 17 bullish hedge fund positions. Post Holdings Inc (NYSE:POST) is not the most popular stock in this group but hedge fund interest is still above average. This is a slightly positive signal but we’d rather spend our time researching stocks that hedge funds are piling on. Our calculations showed that top 15 most popular stocks among hedge funds returned 21.3% through April 8th and outperformed the S&P 500 ETF (SPY) by more than 5 percentage points. Hedge funds were also right about betting on POST as the stock returned 22.6% and outperformed the market as well.