Portola Pharmaceuticals Inc (NASDAQ:PTLA) was in 14 hedge funds’ portfolios at the end of the fourth quarter of 2018. PTLA investors should pay attention to a decrease in enthusiasm from smart money in recent months. There were 23 hedge funds in our database with PTLA holdings at the end of the previous quarter. Our calculations also showed that PTLA isn’t among the 30 most popular stocks among hedge funds.

How have hedgies been trading Portola Pharmaceuticals Inc (NASDAQ:PTLA)? 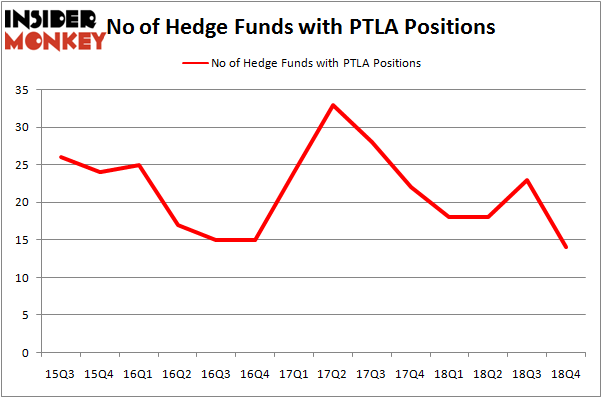 According to publicly available hedge fund and institutional investor holdings data compiled by Insider Monkey, Cadian Capital, managed by Eric Bannasch, holds the number one position in Portola Pharmaceuticals Inc (NASDAQ:PTLA). Cadian Capital has a $126.2 million position in the stock, comprising 5.9% of its 13F portfolio. Sitting at the No. 2 spot is Deerfield Management, led by James E. Flynn, holding a $32.7 million position; 1.3% of its 13F portfolio is allocated to the stock. Remaining professional money managers that are bullish consist of James Dondero’s Highland Capital Management, Jerome Pfund and Michael Sjostrom’s Sectoral Asset Management and Phill Gross and Robert Atchinson’s Adage Capital Management.

Because Portola Pharmaceuticals Inc (NASDAQ:PTLA) has experienced falling interest from the aggregate hedge fund industry, logic holds that there lies a certain “tier” of hedge funds who sold off their full holdings in the third quarter. Intriguingly, Christopher James’s Partner Fund Management said goodbye to the biggest stake of the 700 funds tracked by Insider Monkey, totaling close to $122.5 million in stock, and Kelly Hampaul’s Everett Capital Advisors was right behind this move, as the fund sold off about $22.8 million worth. These moves are intriguing to say the least, as aggregate hedge fund interest was cut by 9 funds in the third quarter.

As you can see these stocks had an average of 19.25 hedge funds with bullish positions and the average amount invested in these stocks was $193 million. That figure was $242 million in PTLA’s case. NutriSystem Inc. (NASDAQ:NTRI) is the most popular stock in this table. On the other hand HFF, Inc. (NYSE:HF) is the least popular one with only 13 bullish hedge fund positions. Portola Pharmaceuticals Inc (NASDAQ:PTLA) is not the least popular stock in this group but hedge fund interest is still below average. Our calculations showed that top 15 most popular stocks) among hedge funds returned 24.2% through April 22nd and outperformed the S&P 500 ETF (SPY) by more than 7 percentage points. A small number of hedge funds were also right about betting on PTLA as the stock returned 76.5% and outperformed the market by an even larger margin.