Did Hedge Funds Drop The Ball On Perspecta Inc. (PRSP) ?

We at Insider Monkey have gone over 700 13F filings that hedge funds and prominent investors are required to file by the SEC. The 13F filings show the funds’ and investors’ portfolio positions as of December 31st. In this article we look at what those investors think of Perspecta Inc. (NYSE:PRSP).

Perspecta Inc. (NYSE:PRSP) was in 37 hedge funds’ portfolios at the end of the fourth quarter of 2018. PRSP investors should pay attention to a decrease in hedge fund sentiment lately. There were 42 hedge funds in our database with PRSP holdings at the end of the previous quarter. Our calculations also showed that PRSP isn’t among the 30 most popular stocks among hedge funds.

To the average investor there are many indicators investors use to assess stocks. Two of the best indicators are hedge fund and insider trading interest. Our experts have shown that, historically, those who follow the top picks of the top fund managers can beat the S&P 500 by a solid margin (see the details here).

Heading into the first quarter of 2019, a total of 37 of the hedge funds tracked by Insider Monkey were bullish on this stock, a change of -12% from the second quarter of 2018. The graph below displays the number of hedge funds with bullish position in PRSP over the last 14 quarters. With the smart money’s positions undergoing their usual ebb and flow, there exists a select group of noteworthy hedge fund managers who were adding to their stakes significantly (or already accumulated large positions). 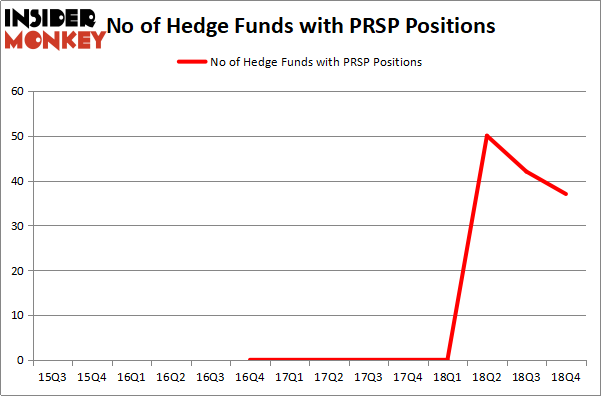 According to Insider Monkey’s hedge fund database, Lee Ainslie’s Maverick Capital has the most valuable position in Perspecta Inc. (NYSE:PRSP), worth close to $136.1 million, amounting to 2% of its total 13F portfolio. On Maverick Capital’s heels is Dorsal Capital Management, managed by Ryan Frick and Oliver Evans, which holds a $54.2 million position; the fund has 3.8% of its 13F portfolio invested in the stock. Other hedge funds and institutional investors that hold long positions encompass Michael Doheny’s Freshford Capital Management, Will Cook’s Sunriver Management and Per Johanssoná’s Bodenholm Capital.

Because Perspecta Inc. (NYSE:PRSP) has faced bearish sentiment from the entirety of the hedge funds we track, it’s safe to say that there exists a select few hedgies that slashed their full holdings in the third quarter. Interestingly, Michael Blitzer’s Kingstown Capital Management sold off the biggest investment of the 700 funds followed by Insider Monkey, valued at about $32.2 million in stock, and James Dondero’s Highland Capital Management was right behind this move, as the fund sold off about $10.6 million worth. These transactions are intriguing to say the least, as aggregate hedge fund interest dropped by 5 funds in the third quarter.

As you can see these stocks had an average of 21.5 hedge funds with bullish positions and the average amount invested in these stocks was $224 million. That figure was $535 million in PRSP’s case. Stamps.com Inc. (NASDAQ:STMP) is the most popular stock in this table. On the other hand Bank of Hawaii Corporation (NYSE:BOH) is the least popular one with only 13 bullish hedge fund positions. Compared to these stocks Perspecta Inc. (NYSE:PRSP) is more popular among hedge funds. Our calculations showed that top 15 most popular stocks) among hedge funds returned 24.2% through April 22nd and outperformed the S&P 500 ETF (SPY) by more than 7 percentage points. Hedge funds were also right about betting on PRSP as the stock returned 27.6% and outperformed the market by an even larger margin. Hedge funds were clearly right about piling into this stock relative to other stocks with similar market capitalizations.