It seems that the masses and most of the financial media hate hedge funds and what they do, but why is this hatred of hedge funds so prominent? At the end of the day, these asset management firms do not gamble the hard-earned money of the people who are on the edge of poverty. Truth be told, most hedge fund managers and other smaller players within this industry are very smart and skilled investors. Of course, they may also make wrong bets in some instances, but no one knows what the future holds and how market participants will react to the bountiful news that floods in each day. The Standard and Poor’s 500 Index returned approximately 13.1% in the first 2.5 months of this year (including dividend payments). Conversely, hedge funds’ top 15 large-cap stock picks generated a return of 19.7% during the same 2.5-month period, with 93% of these stock picks outperforming the broader market benchmark. Coincidence? It might happen to be so, but it is unlikely. Our research covering the last 18 years indicates that hedge funds’ stock picks generate superior risk-adjusted returns. That’s why we believe it isn’t a waste of time to check out hedge fund sentiment before you invest in a stock like PDC Energy Inc (NASDAQ:PDCE).

PDC Energy Inc (NASDAQ:PDCE) was in 16 hedge funds’ portfolios at the end of December. PDCE has experienced a decrease in hedge fund sentiment recently. There were 19 hedge funds in our database with PDCE positions at the end of the previous quarter. Our calculations also showed that pdce isn’t among the 30 most popular stocks among hedge funds.

In the 21st century investor’s toolkit there are a multitude of tools stock traders use to value publicly traded companies. A pair of the best tools are hedge fund and insider trading sentiment. We have shown that, historically, those who follow the best picks of the elite investment managers can beat their index-focused peers by a very impressive amount (see the details here).

At the end of the fourth quarter, a total of 16 of the hedge funds tracked by Insider Monkey were bullish on this stock, a change of -16% from the second quarter of 2018. By comparison, 13 hedge funds held shares or bullish call options in PDCE a year ago. With the smart money’s sentiment swirling, there exists a select group of notable hedge fund managers who were increasing their holdings considerably (or already accumulated large positions). 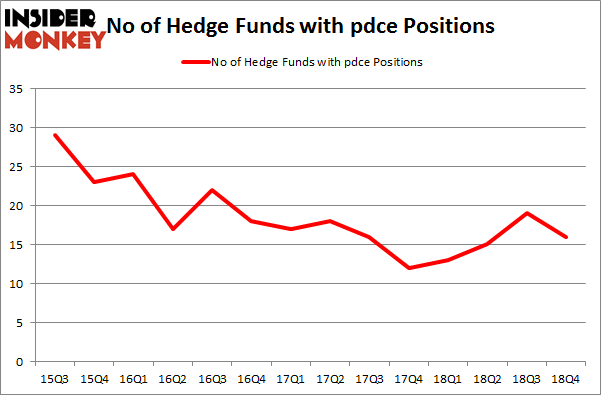 The largest stake in PDC Energy Inc (NASDAQ:PDCE) was held by Millennium Management, which reported holding $61.6 million worth of stock at the end of September. It was followed by Citadel Investment Group with a $60.3 million position. Other investors bullish on the company included Mangrove Partners, Balyasny Asset Management, and Deep Basin Capital.

Since PDC Energy Inc (NASDAQ:PDCE) has witnessed falling interest from the entirety of the hedge funds we track, we can see that there is a sect of hedge funds that decided to sell off their full holdings by the end of the third quarter. It’s worth mentioning that John Labanowski’s Brenham Capital Management cut the biggest position of all the hedgies monitored by Insider Monkey, valued at close to $21.7 million in stock. Daniel Arbess’s fund, Perella Weinberg Partners, also dropped its stock, about $19.9 million worth. These moves are intriguing to say the least, as aggregate hedge fund interest dropped by 3 funds by the end of the third quarter.

As you can see these stocks had an average of 13.25 hedge funds with bullish positions and the average amount invested in these stocks was $195 million. That figure was $278 million in PDCE’s case. Atlantica Yield plc (NASDAQ:AY) is the most popular stock in this table. On the other hand Denali Therapeutics Inc. (NASDAQ:DNLI) is the least popular one with only 5 bullish hedge fund positions. PDC Energy Inc (NASDAQ:PDCE) is not the most popular stock in this group but hedge fund interest is still above average. Our calculations showed that top 15 most popular stocks) among hedge funds returned 24.2% through April 22nd and outperformed the S&P 500 ETF (SPY) by more than 7 percentage points. Hedge funds were also right about betting on PDCE as the stock returned 56.8% and outperformed the market by an even larger margin. Hedge funds were rewarded for their relative bullishness.

Is Travelport Worldwide Ltd (TVPT) A Good Stock To Buy ?
Monthly Newsletter Strategy
Download a free copy of our newsletter and see the details inside!
Hedge Fund Resource Center
Related News
PDC Energy Inc (PDCE): Hedge Funds Are Snapping Up Newell, Office Depot, Anadarko Petroleum, and More: Why These Stocks Are Moving Should You Buy PDC Energy Inc (PDCE)? Why Tesla, Chesapeake, and 3 Other Companies Are in the Spotlight Today A Look At 5 Stocks Which Are Trending On Wednesday Noteworthy Insider Trading Activity at These 5 Companies as Insider Buying Ratio Increases Insider Selling At Chemed Corporation (CHE), PDC Energy Inc. (PDCE) And Others; How Much Should Investors Worry? 18 Cute Tinder Bio Examples (Female) 20 Clever Bumble Bios for Guys 15 Most Physically Demanding Olympic Sports
Billionaire Hedge Funds