Did Hedge Funds Drop The Ball On Opera Limited (OPRA) ?

Is Opera Limited (NASDAQ:OPRA) a good place to invest some of your money right now? We can gain invaluable insight to help us answer that question by studying the investment trends of top investors, who employ world-class Ivy League graduates, who are given immense resources and industry contacts to put their financial expertise to work. The top picks of these firms have historically outperformed the market when we account for known risk factors, making them very valuable investment ideas.

Opera Limited (NASDAQ:OPRA) investors should pay attention to a decrease in support from the world’s most elite money managers of late. OPRA was in 5 hedge funds’ portfolios at the end of the fourth quarter of 2018. There were 8 hedge funds in our database with OPRA holdings at the end of the previous quarter. Our calculations also showed that opra isn’t among the 30 most popular stocks among hedge funds.

We’re going to take a gander at the latest hedge fund action regarding Opera Limited (NASDAQ:OPRA). 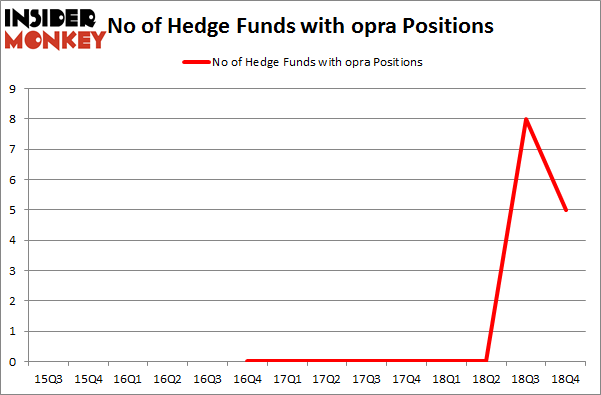 Of the funds tracked by Insider Monkey, Rob Citrone’s Discovery Capital Management has the biggest position in Opera Limited (NASDAQ:OPRA), worth close to $3.2 million, corresponding to 0.3% of its total 13F portfolio. The second most bullish fund manager is Marshall Wace LLP, managed by Paul Marshall and Ian Wace, which holds a $1.1 million position; less than 0.1%% of its 13F portfolio is allocated to the company. Some other peers that are bullish consist of Hugh Sloane’s Sloane Robinson Investment Management, Ken Griffin’s Citadel Investment Group and Israel Englander’s Millennium Management.

Judging by the fact that Opera Limited (NASDAQ:OPRA) has experienced a decline in interest from hedge fund managers, we can see that there is a sect of hedge funds who sold off their positions entirely last quarter. It’s worth mentioning that Michael Platt and William Reeves’s BlueCrest Capital Mgmt. cut the largest position of the “upper crust” of funds tracked by Insider Monkey, valued at an estimated $0.7 million in stock. Steve Cohen’s fund, Point72 Asset Management, also dropped its stock, about $0.2 million worth. These bearish behaviors are interesting, as aggregate hedge fund interest was cut by 3 funds last quarter.

As you can see these stocks had an average of 13 hedge funds with bullish positions and the average amount invested in these stocks was $92 million. That figure was $5 million in OPRA’s case. Waitr Holdings Inc. (NASDAQ:WTRH) is the most popular stock in this table. On the other hand ProQR Therapeutics NV (NASDAQ:PRQR) is the least popular one with only 11 bullish hedge fund positions. Compared to these stocks Opera Limited (NASDAQ:OPRA) is even less popular than PRQR. Hedge funds clearly dropped the ball on OPRA as the stock delivered strong returns, though hedge funds’ consensus picks still generated respectable returns. Our calculations showed that top 15 most popular stocks) among hedge funds returned 24.2% through April 22nd and outperformed the S&P 500 ETF (SPY) by more than 7 percentage points. A small number of hedge funds were also right about betting on OPRA as the stock returned 54.1% and outperformed the market by an even larger margin.