Did Hedge Funds Drop The Ball On On Dana Incorporated (DAN) ?

The latest 13F reporting period has come and gone, and Insider Monkey is again at the forefront when it comes to making use of this gold mine of data. We have processed the filings of the more than 700 world-class investment firms that we track and now have access to the collective wisdom contained in these filings, which are based on their December 31 holdings, data that is available nowhere else. Should you consider Dana Incorporated (NYSE:DAN) for your portfolio? We’ll look to this invaluable collective wisdom for the answer.

Dana Incorporated (NYSE:DAN) shares haven’t seen a lot of action during the third quarter. Overall, hedge fund sentiment was unchanged. The stock was in 28 hedge funds’ portfolios at the end of the fourth quarter of 2018. At the end of this article we will also compare DAN to other stocks including Imperva Inc (NYSE:IMPV), Otter Tail Corporation (NASDAQ:OTTR), and MyoKardia, Inc. (NASDAQ:MYOK) to get a better sense of its popularity.

How have hedgies been trading Dana Incorporated (NYSE:DAN)?

At Q4’s end, a total of 28 of the hedge funds tracked by Insider Monkey held long positions in this stock, a change of 0% from one quarter earlier. The graph below displays the number of hedge funds with bullish position in DAN over the last 14 quarters. With hedge funds’ capital changing hands, there exists a few notable hedge fund managers who were adding to their holdings meaningfully (or already accumulated large positions). 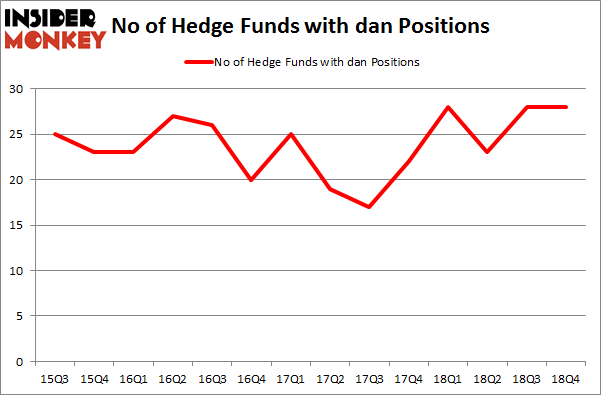 Among these funds, Anchor Bolt Capital held the most valuable stake in Dana Incorporated (NYSE:DAN), which was worth $54.1 million at the end of the third quarter. On the second spot was GAMCO Investors which amassed $50.4 million worth of shares. Moreover, D E Shaw, Citadel Investment Group, and Precision Path Capital were also bullish on Dana Incorporated (NYSE:DAN), allocating a large percentage of their portfolios to this stock.

Due to the fact that Dana Incorporated (NYSE:DAN) has witnessed falling interest from the entirety of the hedge funds we track, it’s easy to see that there exists a select few fund managers who were dropping their positions entirely last quarter. Interestingly, Anand Parekh’s Alyeska Investment Group dumped the biggest stake of all the hedgies watched by Insider Monkey, valued at about $10.2 million in stock, and Gregg Moskowitz’s Interval Partners was right behind this move, as the fund said goodbye to about $6.1 million worth. These transactions are intriguing to say the least, as total hedge fund interest stayed the same (this is a bearish signal in our experience).

As you can see these stocks had an average of 18.75 hedge funds with bullish positions and the average amount invested in these stocks was $291 million. That figure was $279 million in DAN’s case. Imperva Inc (NYSE:IMPV) is the most popular stock in this table. On the other hand Otter Tail Corporation (NASDAQ:OTTR) is the least popular one with only 12 bullish hedge fund positions. Compared to these stocks Dana Incorporated (NYSE:DAN) is more popular among hedge funds. Our calculations showed that top 15 most popular stocks) among hedge funds returned 24.2% through April 22nd and outperformed the S&P 500 ETF (SPY) by more than 7 percentage points. Hedge funds were also right about betting on DAN as the stock returned 48% and outperformed the market by an even larger margin. Hedge funds were clearly right about piling into this stock relative to other stocks with similar market capitalizations.