There are several ways to beat the market, and investing in small cap stocks has historically been one of them. We like to improve the odds of beating the market further by examining what famous hedge fund operators such as Jeff Ubben, George Soros and Carl Icahn think. Those hedge fund operators make billions of dollars each year by hiring the best and the brightest to do research on stocks, including small cap stocks that big brokerage houses simply don’t cover. Because of Carl Icahn and other elite funds’ exemplary historical records, we pay attention to their small cap picks. In this article, we use hedge fund filing data to analyze Och-Ziff Capital Management Group LLC (NYSE:OZM).

Hedge fund interest in Och-Ziff Capital Management Group LLC (NYSE:OZM) shares was flat at the end of last quarter. This is usually a negative indicator. At the end of this article we will also compare OZM to other stocks including CONSOL Coal Resources LP (NYSE:CCR), Forum Energy Technologies Inc (NYSE:FET), and Kezar Life Sciences, Inc. (NASDAQ:KZR) to get a better sense of its popularity. 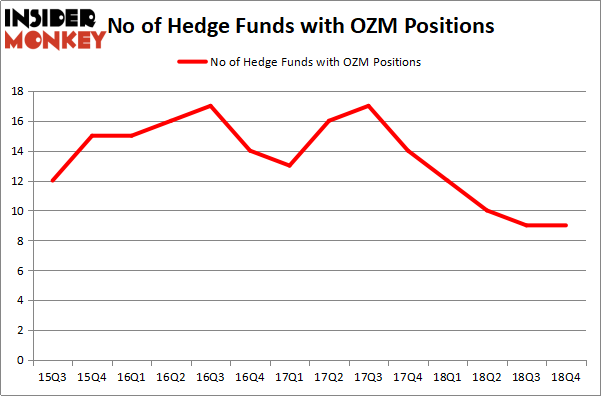 The largest stake in Och-Ziff Capital Management Group LLC (NYSE:OZM) was held by Odey Asset Management Group, which reported holding $54.9 million worth of stock at the end of December. It was followed by Abrams Capital Management with a $20.5 million position. Other investors bullish on the company included North Run Capital, Kamunting Street Capital, and Royce & Associates.

Since Och-Ziff Capital Management Group LLC (NYSE:OZM) has witnessed declining sentiment from the aggregate hedge fund industry, it’s easy to see that there lies a certain “tier” of hedge funds that decided to sell off their positions entirely in the third quarter. Interestingly, Jim Simons’s Renaissance Technologies dumped the biggest stake of the “upper crust” of funds followed by Insider Monkey, valued at close to $0.2 million in call options, and Ken Griffin’s Citadel Investment Group was right behind this move, as the fund sold off about $0 million worth. These moves are interesting, as aggregate hedge fund interest stayed the same (this is a bearish signal in our experience).

As you can see these stocks had an average of 8.5 hedge funds with bullish positions and the average amount invested in these stocks was $72 million. That figure was $82 million in OZM’s case. The Bancorp, Inc. (NASDAQ:TBBK) is the most popular stock in this table. On the other hand Kezar Life Sciences, Inc. (NASDAQ:KZR) is the least popular one with only 4 bullish hedge fund positions. Och-Ziff Capital Management Group LLC (NYSE:OZM) is not the most popular stock in this group but hedge fund interest is still above average. Our calculations showed that top 15 most popular stocks) among hedge funds returned 24.2% through April 22nd and outperformed the S&P 500 ETF (SPY) by more than 7 percentage points. Hedge funds were also right about betting on OZM as the stock returned 60.9% and outperformed the market by an even larger margin. Hedge funds were rewarded for their relative bullishness.