Did Hedge Funds Drop The Ball On nLIGHT, Inc. (LASR)?

Is nLIGHT, Inc. (NASDAQ:LASR) a bargain? Money managers are turning less bullish. The number of bullish hedge fund bets dropped by 1 in recent months. Our calculations also showed that LASR isn’t among the 30 most popular stocks among hedge funds.

At the end of the fourth quarter, a total of 4 of the hedge funds tracked by Insider Monkey were bullish on this stock, a change of -20% from the previous quarter. The graph below displays the number of hedge funds with bullish position in LASR over the last 14 quarters. With the smart money’s positions undergoing their usual ebb and flow, there exists a select group of noteworthy hedge fund managers who were upping their holdings considerably (or already accumulated large positions). 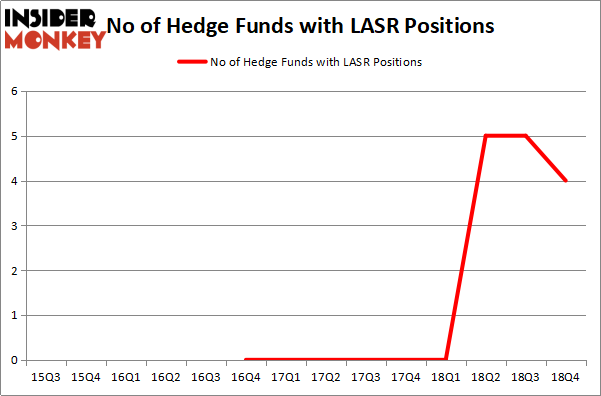 More specifically, Royce & Associates was the largest shareholder of nLIGHT, Inc. (NASDAQ:LASR), with a stake worth $25.5 million reported as of the end of December. Trailing Royce & Associates was HBK Investments, which amassed a stake valued at $1.2 million. Balyasny Asset Management and Driehaus Capital were also very fond of the stock, giving the stock large weights in their portfolios.

Judging by the fact that nLIGHT, Inc. (NASDAQ:LASR) has experienced a decline in interest from the aggregate hedge fund industry, logic holds that there were a few money managers that slashed their positions entirely in the third quarter. At the top of the heap, Anand Parekh’s Alyeska Investment Group cut the biggest investment of the 700 funds monitored by Insider Monkey, worth close to $1 million in stock, and Steve Cohen’s Point72 Asset Management was right behind this move, as the fund said goodbye to about $0.6 million worth. These moves are important to note, as total hedge fund interest fell by 1 funds in the third quarter.

As you can see these stocks had an average of 8.75 hedge funds with bullish positions and the average amount invested in these stocks was $61 million. That figure was $27 million in LASR’s case. Photronics, Inc. (NASDAQ:PLAB) is the most popular stock in this table. On the other hand Weidai Ltd. (NYSE:WEI) is the least popular one with only 1 bullish hedge fund positions. nLIGHT, Inc. (NASDAQ:LASR) is not the least popular stock in this group but hedge fund interest is still below average. Our calculations showed that top 15 most popular stocks) among hedge funds returned 24.2% through April 22nd and outperformed the S&P 500 ETF (SPY) by more than 7 percentage points. A small number of hedge funds were also right about betting on LASR as the stock returned 39.5% and outperformed the market by an even larger margin.