After several tireless days we have finished crunching the numbers from nearly 750 13F filings issued by the elite hedge funds and other investment firms that we track at Insider Monkey, which disclosed those firms’ equity portfolios as of June 28. The results of that effort will be put on display in this article, as we share valuable insight into the smart money sentiment towards Newell Brands Inc. (NYSE:NWL).

Newell Brands Inc. (NYSE:NWL) was in 29 hedge funds’ portfolios at the end of the second quarter of 2019. NWL has seen a decrease in support from the world’s most elite money managers of late. There were 30 hedge funds in our database with NWL positions at the end of the previous quarter. Our calculations also showed that NWL isn’t among the 30 most popular stocks among hedge funds (see the video below).

What does smart money think about Newell Brands Inc. (NYSE:NWL)?

At Q2’s end, a total of 29 of the hedge funds tracked by Insider Monkey held long positions in this stock, a change of -3% from the previous quarter. Below, you can check out the change in hedge fund sentiment towards NWL over the last 16 quarters. With hedgies’ sentiment swirling, there exists a few key hedge fund managers who were increasing their holdings substantially (or already accumulated large positions). 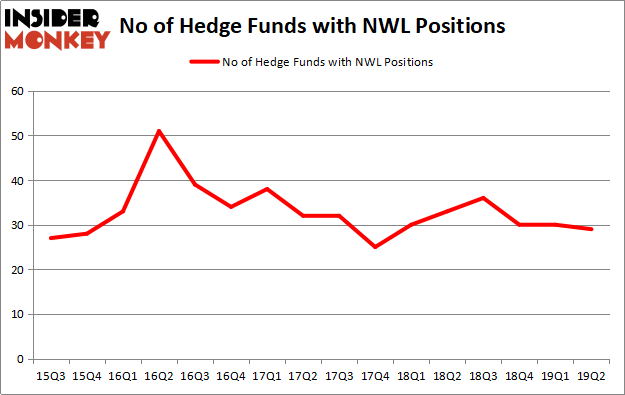 The largest stake in Newell Brands Inc. (NYSE:NWL) was held by Icahn Capital LP, which reported holding $634.1 million worth of stock at the end of March. It was followed by Pzena Investment Management with a $385.7 million position. Other investors bullish on the company included Gotham Asset Management, D E Shaw, and Citadel Investment Group.

Judging by the fact that Newell Brands Inc. (NYSE:NWL) has witnessed declining sentiment from the entirety of the hedge funds we track, it’s safe to say that there were a few hedge funds that decided to sell off their full holdings heading into Q3. Interestingly, Renaissance Technologies dropped the largest stake of the 750 funds tracked by Insider Monkey, worth close to $41.3 million in stock, and Ahmet Okumus’s Okumus Fund Management was right behind this move, as the fund said goodbye to about $23.3 million worth. These transactions are intriguing to say the least, as total hedge fund interest was cut by 1 funds heading into Q3.

As you can see these stocks had an average of 20 hedge funds with bullish positions and the average amount invested in these stocks was $523 million. That figure was $1132 million in NWL’s case. Owens Corning (NYSE:OC) is the most popular stock in this table. On the other hand Dr. Reddy’s Laboratories Limited (NYSE:RDY) is the least popular one with only 11 bullish hedge fund positions. Newell Brands Inc. (NYSE:NWL) is not the most popular stock in this group but hedge fund interest is still above average. Our calculations showed that top 20 most popular stocks among hedge funds returned 24.4% in 2019 through September 30th and outperformed the S&P 500 ETF (SPY) by 4 percentage points. Hedge funds were also right about betting on NWL as the stock returned 23.1% during the third quarter and outperformed the market. Hedge funds were rewarded for their relative bullishness.