Did Hedge Funds Drop The Ball On Nevro Corp (NVRO) ?

Is Nevro Corp (NYSE:NVRO) a healthy stock for your portfolio? Prominent investors are reducing their bets on the stock. The number of long hedge fund positions were cut by 4 in recent months. Our calculations also showed that nvro isn’t among the 30 most popular stocks among hedge funds.

At Q4’s end, a total of 20 of the hedge funds tracked by Insider Monkey held long positions in this stock, a change of -17% from one quarter earlier. The graph below displays the number of hedge funds with bullish position in NVRO over the last 14 quarters. With hedge funds’ sentiment swirling, there exists an “upper tier” of notable hedge fund managers who were adding to their stakes considerably (or already accumulated large positions). 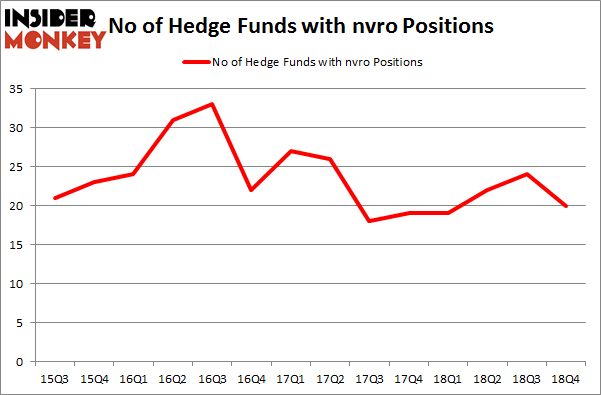 Among these funds, Point72 Asset Management held the most valuable stake in Nevro Corp (NYSE:NVRO), which was worth $51.3 million at the end of the fourth quarter. On the second spot was D E Shaw which amassed $51.2 million worth of shares. Moreover, Millennium Management, Citadel Investment Group, and Broadfin Capital were also bullish on Nevro Corp (NYSE:NVRO), allocating a large percentage of their portfolios to this stock.

Since Nevro Corp (NYSE:NVRO) has witnessed a decline in interest from the entirety of the hedge funds we track, it’s easy to see that there is a sect of hedgies who were dropping their positions entirely in the third quarter. It’s worth mentioning that Mitchell Blutt’s Consonance Capital Management said goodbye to the largest position of the 700 funds tracked by Insider Monkey, totaling about $82.4 million in stock. Samuel Isaly’s fund, OrbiMed Advisors, also cut its stock, about $77.4 million worth. These bearish behaviors are important to note, as total hedge fund interest dropped by 4 funds in the third quarter.

Let’s go over hedge fund activity in other stocks – not necessarily in the same industry as Nevro Corp (NYSE:NVRO) but similarly valued. We will take a look at Sangamo Therapeutics, Inc. (NASDAQ:SGMO), Frank’s International N.V. (NYSE:FI), PROS Holdings, Inc. (NYSE:PRO), and TiVo Corporation (NASDAQ:TIVO). All of these stocks’ market caps are similar to NVRO’s market cap.

As you can see these stocks had an average of 17.25 hedge funds with bullish positions and the average amount invested in these stocks was $77 million. That figure was $296 million in NVRO’s case. Sangamo Therapeutics, Inc. (NASDAQ:SGMO) is the most popular stock in this table. On the other hand Frank’s International N.V. (NYSE:FI) is the least popular one with only 12 bullish hedge fund positions. Nevro Corp (NYSE:NVRO) is not the most popular stock in this group but hedge fund interest is still above average. Our calculations showed that top 15 most popular stocks) among hedge funds returned 24.2% through April 22nd and outperformed the S&P 500 ETF (SPY) by more than 7 percentage points. Hedge funds were also right about betting on NVRO as the stock returned 65.7% and outperformed the market by an even larger margin. Hedge funds were rewarded for their relative bullishness.