Did Hedge Funds Drop The Ball On Natera Inc (NTRA) ?

Hedge funds are known to underperform the bull markets but that’s not because they are terrible at stock picking. Hedge funds underperform because their net exposure in only 40-70% and they charge exorbitant fees. No one knows what the future holds and how market participants will react to the bountiful news that floods in each day. However, hedge funds’ consensus picks on average deliver market beating returns. For example in the first 5 months of this year through May 30th the Standard and Poor’s 500 Index returned approximately 12.1% (including dividend payments). Conversely, hedge funds’ top 20 large-cap stock picks generated a return of 18.7% during the same 5-month period, with the majority of these stock picks outperforming the broader market benchmark. Interestingly, an average long/short hedge fund returned only a fraction of this value due to the hedges they implemented and the large fees they charged. If you pay attention to the actual hedge fund returns versus the returns of their long stock picks, you might believe that it is a waste of time to analyze hedge funds’ purchases. We know better. That’s why we scrutinize hedge fund sentiment before we invest in a stock like Natera Inc (NASDAQ:NTRA).

Is Natera Inc (NASDAQ:NTRA) an excellent investment right now? Hedge funds are betting on the stock. The number of bullish hedge fund positions advanced by 1 recently. Our calculations also showed that NTRA isn’t among the 30 most popular stocks among hedge funds. NTRA was in 18 hedge funds’ portfolios at the end of March. There were 17 hedge funds in our database with NTRA positions at the end of the previous quarter.

To the average investor there are a lot of metrics market participants put to use to size up publicly traded companies. Two of the most innovative metrics are hedge fund and insider trading moves. We have shown that, historically, those who follow the best picks of the best fund managers can outclass their index-focused peers by a superb amount (see the details here).

What have hedge funds been doing with Natera Inc (NASDAQ:NTRA)?

Heading into the second quarter of 2019, a total of 18 of the hedge funds tracked by Insider Monkey were long this stock, a change of 6% from one quarter earlier. On the other hand, there were a total of 12 hedge funds with a bullish position in NTRA a year ago. With hedge funds’ sentiment swirling, there exists a select group of notable hedge fund managers who were boosting their holdings substantially (or already accumulated large positions). 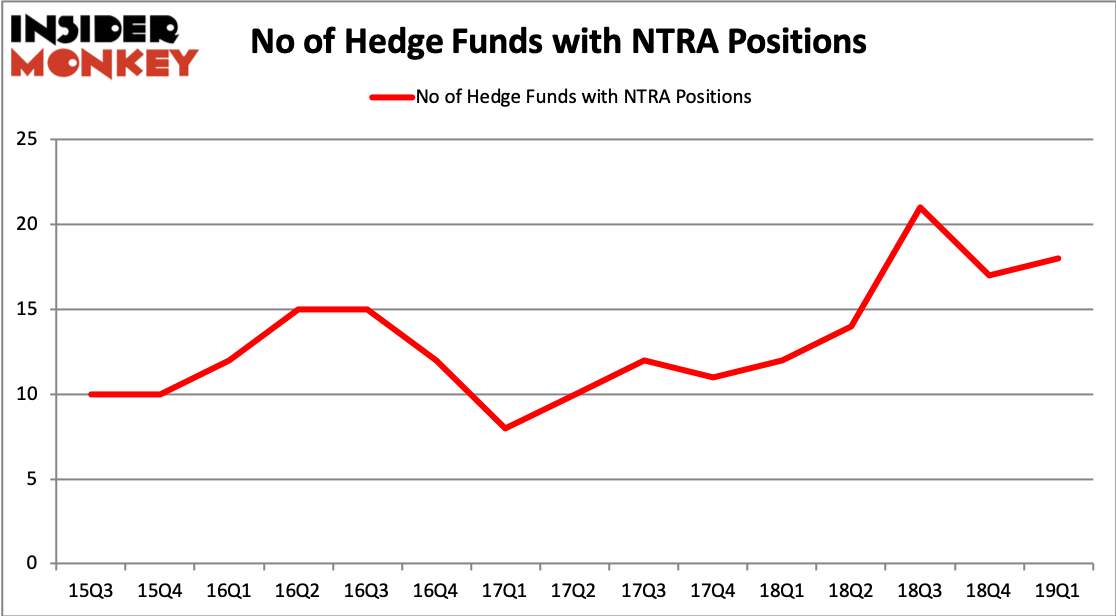 Among these funds, Millennium Management held the most valuable stake in Natera Inc (NASDAQ:NTRA), which was worth $62.2 million at the end of the first quarter. On the second spot was Deerfield Management which amassed $27.3 million worth of shares. Moreover, OrbiMed Advisors, Renaissance Technologies, and Foresite Capital were also bullish on Natera Inc (NASDAQ:NTRA), allocating a large percentage of their portfolios to this stock.

With a general bullishness amongst the heavyweights, key money managers were breaking ground themselves. PDT Partners, managed by Peter Muller, initiated the most outsized position in Natera Inc (NASDAQ:NTRA). PDT Partners had $1 million invested in the company at the end of the quarter. David Costen Haley’s HBK Investments also initiated a $0.6 million position during the quarter. The following funds were also among the new NTRA investors: Michael Gelband’s ExodusPoint Capital and Paul Marshall and Ian Wace’s Marshall Wace LLP.

As you can see these stocks had an average of 13.5 hedge funds with bullish positions and the average amount invested in these stocks was $154 million. That figure was $154 million in NTRA’s case. Varex Imaging Corporation (NASDAQ:VREX) is the most popular stock in this table. On the other hand First Majestic Silver Corp (NYSE:AG) is the least popular one with only 8 bullish hedge fund positions. Natera Inc (NASDAQ:NTRA) is not the most popular stock in this group but hedge fund interest is still above average. Our calculations showed that top 20 most popular stocks among hedge funds returned 1.9% in Q2 through May 30th and outperformed the S&P 500 ETF (SPY) by more than 3 percentage points. Hedge funds were also right about betting on NTRA as the stock returned 15.2% during the same period and outperformed the market by an even larger margin. Hedge funds were rewarded for their relative bullishness.