Before we spend countless hours researching a company, we’d like to analyze what insiders, hedge funds and billionaire investors think of the stock first. We would like to do so because our research has shown that the elite investors’ consensus returns have been exceptional. In the following paragraphs, we find out what the billionaire investors and hedge funds think of MTS Systems Corporation (NASDAQ:MTSC).

MTS Systems Corporation (NASDAQ:MTSC) shares haven’t seen a lot of action during the third quarter. Overall, hedge fund sentiment was unchanged. The stock was in 12 hedge funds’ portfolios at the end of December. The level and the change in hedge fund popularity aren’t the only variables you need to analyze to decipher hedge funds’ perspectives. A stock may witness a boost in popularity but it may still be less popular than similarly priced stocks. That’s why at the end of this article we will examine companies such as Nabors Industries Ltd. (NYSE:NBR), ImmunoGen, Inc. (NASDAQ:IMGN), and OraSure Technologies, Inc. (NASDAQ:OSUR) to gather more data points.

What does the smart money think about MTS Systems Corporation (NASDAQ:MTSC)?

Heading into the first quarter of 2019, a total of 12 of the hedge funds tracked by Insider Monkey were long this stock, a change of 0% from the second quarter of 2018. On the other hand, there were a total of 13 hedge funds with a bullish position in MTSC a year ago. With hedge funds’ capital changing hands, there exists an “upper tier” of key hedge fund managers who were upping their holdings significantly (or already accumulated large positions). 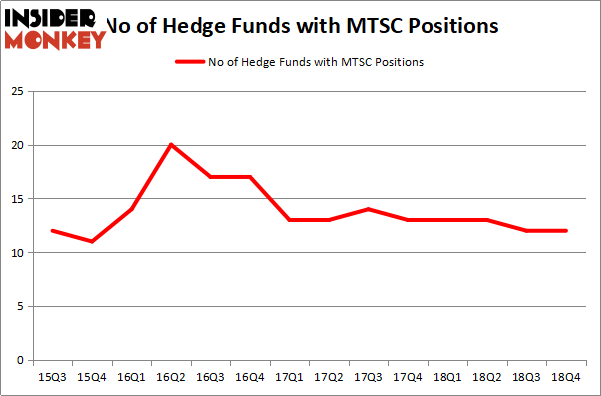 When looking at the institutional investors followed by Insider Monkey, John W. Rogers’s Ariel Investments has the biggest position in MTS Systems Corporation (NASDAQ:MTSC), worth close to $69.8 million, amounting to 1% of its total 13F portfolio. The second largest stake is held by Select Equity Group, managed by Robert Joseph Caruso, which holds a $9.2 million position; 0.1% of its 13F portfolio is allocated to the company. Other hedge funds and institutional investors that are bullish consist of Jim Simons’s Renaissance Technologies, Israel Englander’s Millennium Management and Ken Griffin’s Citadel Investment Group.

Due to the fact that MTS Systems Corporation (NASDAQ:MTSC) has experienced bearish sentiment from the entirety of the hedge funds we track, it’s safe to say that there is a sect of hedge funds that elected to cut their full holdings last quarter. At the top of the heap, Peter Muller’s PDT Partners said goodbye to the largest stake of all the hedgies monitored by Insider Monkey, worth an estimated $1.2 million in stock, and Joel Greenblatt’s Gotham Asset Management was right behind this move, as the fund cut about $0.5 million worth. These moves are interesting, as total hedge fund interest stayed the same (this is a bearish signal in our experience).

As you can see these stocks had an average of 20.75 hedge funds with bullish positions and the average amount invested in these stocks was $109 million. That figure was $104 million in MTSC’s case. Nabors Industries Ltd. (NYSE:NBR) is the most popular stock in this table. On the other hand Berry Petroleum Corporation (NASDAQ:BRY) is the least popular one with only 14 bullish hedge fund positions. Compared to these stocks MTS Systems Corporation (NASDAQ:MTSC) is even less popular than BRY. Hedge funds clearly dropped the ball on MTSC as the stock delivered strong returns, though hedge funds’ consensus picks still generated respectable returns. Our calculations showed that top 15 most popular stocks) among hedge funds returned 24.2% through April 22nd and outperformed the S&P 500 ETF (SPY) by more than 7 percentage points. A small number of hedge funds were also right about betting on MTSC as the stock returned 37.9% and outperformed the market by an even larger margin.