MRC Global Inc (NYSE:MRC) shareholders have witnessed a decrease in support from the world’s most elite money managers lately. MRC was in 15 hedge funds’ portfolios at the end of December. There were 17 hedge funds in our database with MRC holdings at the end of the previous quarter. Our calculations also showed that mrc isn’t among the 30 most popular stocks among hedge funds.

How have hedgies been trading MRC Global Inc (NYSE:MRC)?

At Q4’s end, a total of 15 of the hedge funds tracked by Insider Monkey were bullish on this stock, a change of -12% from one quarter earlier. Below, you can check out the change in hedge fund sentiment towards MRC over the last 14 quarters. With hedgies’ capital changing hands, there exists a select group of notable hedge fund managers who were adding to their stakes considerably (or already accumulated large positions). 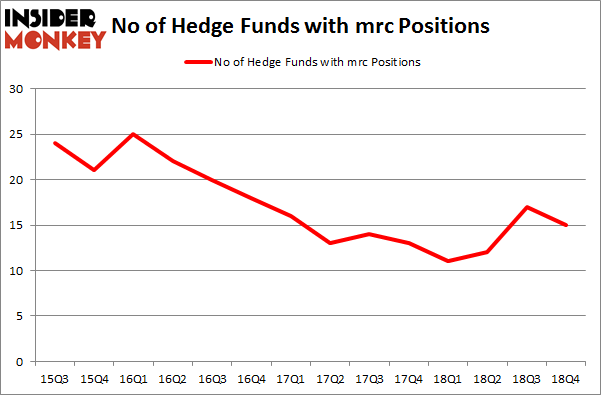 The largest stake in MRC Global Inc (NYSE:MRC) was held by Luminus Management, which reported holding $54.4 million worth of stock at the end of December. It was followed by D E Shaw with a $34.5 million position. Other investors bullish on the company included Impax Asset Management, Renaissance Technologies, and Millennium Management.

Seeing as MRC Global Inc (NYSE:MRC) has faced declining sentiment from hedge fund managers, it’s safe to say that there lies a certain “tier” of hedgies who were dropping their entire stakes last quarter. At the top of the heap, Noam Gottesman’s GLG Partners sold off the largest position of all the hedgies followed by Insider Monkey, valued at about $3 million in stock, and Paul Marshall and Ian Wace’s Marshall Wace LLP was right behind this move, as the fund cut about $2.4 million worth. These bearish behaviors are interesting, as aggregate hedge fund interest fell by 2 funds last quarter.

As you can see these stocks had an average of 13.5 hedge funds with bullish positions and the average amount invested in these stocks was $118 million. That figure was $113 million in MRC’s case. Houghton Mifflin Harcourt Co (NASDAQ:HMHC) is the most popular stock in this table. On the other hand Heritage Financial Corporation (NASDAQ:HFWA) is the least popular one with only 8 bullish hedge fund positions. MRC Global Inc (NYSE:MRC) is not the most popular stock in this group but hedge fund interest is still above average. Our calculations showed that top 15 most popular stocks) among hedge funds returned 24.2% through April 22nd and outperformed the S&P 500 ETF (SPY) by more than 7 percentage points. Hedge funds were also right about betting on MRC as the stock returned 52.5% and outperformed the market by an even larger margin. Hedge funds were rewarded for their relative bullishness.