Did Hedge Funds Drop The Ball On Middleby Corporation (MIDD) ?

We know that hedge funds generate strong, risk-adjusted returns over the long run, therefore imitating the picks that they are collectively bullish on can be a profitable strategy for retail investors. With billions of dollars in assets, smart money investors have to conduct complex analyses, spend many resources and use tools that are not always available for the general crowd. This doesn’t mean that they don’t have occasional colossal losses; they do (like Peltz’s recent General Electric losses). However, it is still a good idea to keep an eye on hedge fund activity. With this in mind, as the current round of 13F filings has just ended, let’s examine the smart money sentiment towards The Middleby Corporation (NASDAQ:MIDD).

The Middleby Corporation (NASDAQ:MIDD) shares haven’t seen a lot of action during the third quarter. Overall, hedge fund sentiment was unchanged. The stock was in 17 hedge funds’ portfolios at the end of the fourth quarter of 2018. At the end of this article we will also compare MIDD to other stocks including Etsy Inc (NASDAQ:ETSY), Five Below Inc (NASDAQ:FIVE), and Michael Kors Holdings Ltd (NYSE:KORS) to get a better sense of its popularity. 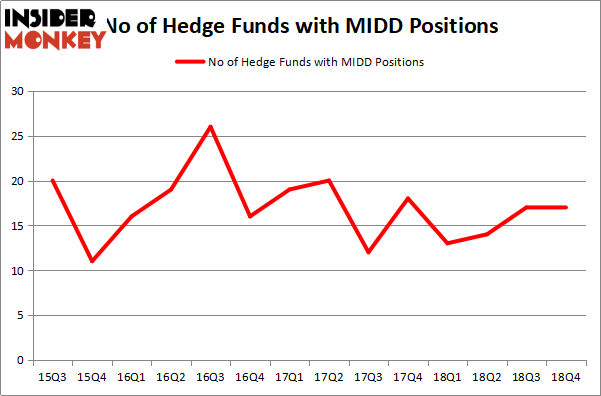 According to Insider Monkey’s hedge fund database, Brian Bares’s Bares Capital Management has the most valuable position in The Middleby Corporation (NASDAQ:MIDD), worth close to $222 million, accounting for 6.7% of its total 13F portfolio. The second most bullish fund manager is Andreas Halvorsen of Viking Global, with a $63.7 million position; 0.4% of its 13F portfolio is allocated to the stock. Remaining hedge funds and institutional investors that hold long positions encompass Greg Poole’s Echo Street Capital Management, Steve Cohen’s Point72 Asset Management and Jeff Lignelli’s Incline Global Management.

Because The Middleby Corporation (NASDAQ:MIDD) has faced a decline in interest from the entirety of the hedge funds we track, it’s safe to say that there is a sect of funds that elected to cut their positions entirely by the end of the third quarter. Interestingly, Mark Kingdon’s Kingdon Capital cut the largest position of all the hedgies followed by Insider Monkey, totaling about $13.3 million in stock, and Louis Bacon’s Moore Global Investments was right behind this move, as the fund said goodbye to about $6.7 million worth. These moves are intriguing to say the least, as total hedge fund interest stayed the same (this is a bearish signal in our experience).

Let’s go over hedge fund activity in other stocks – not necessarily in the same industry as The Middleby Corporation (NASDAQ:MIDD) but similarly valued. These stocks are Etsy Inc (NASDAQ:ETSY), Five Below Inc (NASDAQ:FIVE), Michael Kors Holdings Ltd (NYSE:KORS), and Allison Transmission Holdings Inc (NYSE:ALSN). All of these stocks’ market caps are closest to MIDD’s market cap.

As you can see these stocks had an average of 32.5 hedge funds with bullish positions and the average amount invested in these stocks was $814 million. That figure was $500 million in MIDD’s case. Etsy Inc (NASDAQ:ETSY) is the most popular stock in this table. On the other hand Allison Transmission Holdings Inc (NYSE:ALSN) is the least popular one with only 26 bullish hedge fund positions. Compared to these stocks The Middleby Corporation (NASDAQ:MIDD) is even less popular than ALSN. Considering that hedge funds aren’t fond of this stock in relation to other companies analyzed in this article, it may be a good idea to analyze it in detail and understand why the smart money isn’t behind this stock. This isn’t necessarily bad news. Although it is possible that hedge funds may think the stock is overpriced and view the stock as a short candidate, they may not be very familiar with the bullish thesis. Our calculations showed that top 15 most popular stocks among hedge funds returned 21.3% through April 8th and outperformed the S&P 500 ETF (SPY) by more than 5 percentage points. Hedge funds were also right about betting on MIDD as the stock returned 33.2% and outperformed the market as well.