Is Medidata Solutions Inc (NASDAQ:MDSO) a bargain? Hedge funds are in a pessimistic mood. The number of long hedge fund positions fell by 3 in recent months. Our calculations also showed that MDSO isn’t among the 30 most popular stocks among hedge funds. 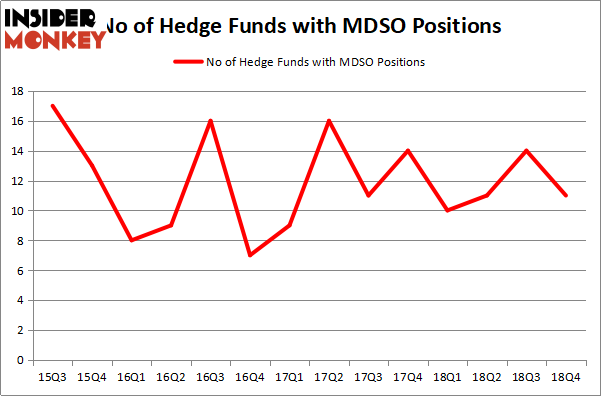 According to publicly available hedge fund and institutional investor holdings data compiled by Insider Monkey, Royce & Associates, managed by Chuck Royce, holds the biggest position in Medidata Solutions Inc (NASDAQ:MDSO). Royce & Associates has a $73.8 million position in the stock, comprising 0.7% of its 13F portfolio. The second largest stake is held by Polar Capital, led by Brian Ashford-Russell and Tim Woolley, holding a $41.4 million position; the fund has 0.4% of its 13F portfolio invested in the stock. Some other hedge funds and institutional investors with similar optimism include Greg Poole’s Echo Street Capital Management, and Ken Griffin’s Citadel Investment Group.

Because Medidata Solutions Inc (NASDAQ:MDSO) has witnessed declining sentiment from the aggregate hedge fund industry, it’s easy to see that there lies a certain “tier” of hedge funds that elected to cut their positions entirely heading into Q3. Interestingly, David Atterbury’s Whetstone Capital Advisors dumped the largest stake of the “upper crust” of funds followed by Insider Monkey, worth an estimated $4.9 million in stock, and Richard Driehaus’s Driehaus Capital was right behind this move, as the fund dumped about $1.9 million worth. These bearish behaviors are interesting, as total hedge fund interest was cut by 3 funds heading into Q3.

As you can see these stocks had an average of 12.75 hedge funds with bullish positions and the average amount invested in these stocks was $106 million. That figure was $146 million in MDSO’s case. Portland General Electric Company (NYSE:POR) is the most popular stock in this table. On the other hand Compania de Minas Buenaventura SA (NYSE:BVN) is the least popular one with only 6 bullish hedge fund positions. Medidata Solutions Inc (NASDAQ:MDSO) is not the least popular stock in this group but hedge fund interest is still below average. Our calculations showed that top 15 most popular stocks) among hedge funds returned 24.2% through April 22nd and outperformed the S&P 500 ETF (SPY) by more than 7 percentage points. A small number of hedge funds were also right about betting on MDSO as the stock returned 33.5% and outperformed the market by an even larger margin.