“Market volatility has picked up again over the past few weeks. Headlines highlight risks regarding interest rates, the Fed, China, house prices, auto sales, trade wars, and more. Uncertainty abounds. But doesn’t it always? I have no view on whether the recent volatility will continue for a while, or whether the market will be back at all-time highs before we know it. I remain focused on preserving and growing our capital, and continue to believe that the best way to do so is via a value-driven, concentrated, patient approach. I shun consensus holdings, rich valuations, and market fads, in favor of solid, yet frequently off-the-beaten-path, businesses run by excellent, aligned management teams, purchased at deep discounts to intrinsic value,” are the words of Maran Capital’s Dan Roller. His stock picks have been beating the S&P 500 Index handily. We pay attention to what hedge funds are doing in a particular stock before considering a potential investment because it works for us. So let’s take a glance at the smart money sentiment towards Lumentum Holdings Inc (NASDAQ:LITE) and see how it was affected.

Lumentum Holdings Inc (NASDAQ:LITE) shareholders have witnessed a decrease in hedge fund sentiment in recent months. LITE was in 31 hedge funds’ portfolios at the end of the fourth quarter of 2018. There were 33 hedge funds in our database with LITE holdings at the end of the previous quarter. Our calculations also showed that lite isn’t among the 30 most popular stocks among hedge funds.

What does the smart money think about Lumentum Holdings Inc (NASDAQ:LITE)? 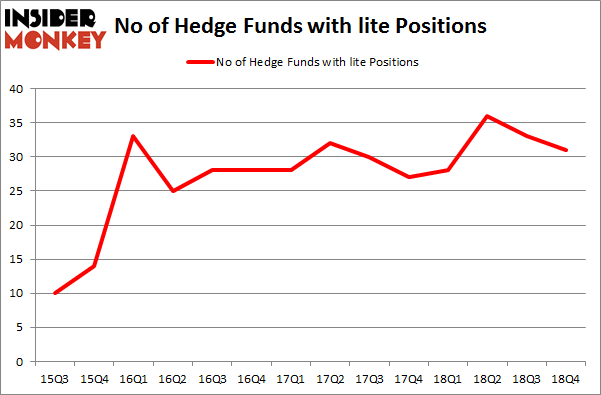 Among these funds, Citadel Investment Group held the most valuable stake in Lumentum Holdings Inc (NASDAQ:LITE), which was worth $41.4 million at the end of the third quarter. On the second spot was Renaissance Technologies which amassed $35.5 million worth of shares. Moreover, AQR Capital Management, Millennium Management, and Polar Capital were also bullish on Lumentum Holdings Inc (NASDAQ:LITE), allocating a large percentage of their portfolios to this stock.

Judging by the fact that Lumentum Holdings Inc (NASDAQ:LITE) has witnessed declining sentiment from hedge fund managers, it’s safe to say that there lies a certain “tier” of money managers who were dropping their full holdings in the third quarter. It’s worth mentioning that Howard Marks’s Oaktree Capital Management cut the biggest position of all the hedgies followed by Insider Monkey, valued at close to $19.2 million in stock. Phill Gross and Robert Atchinson’s fund, Adage Capital Management, also dropped its stock, about $6.1 million worth. These transactions are interesting, as total hedge fund interest dropped by 2 funds in the third quarter.

As you can see these stocks had an average of 12.5 hedge funds with bullish positions and the average amount invested in these stocks was $139 million. That figure was $215 million in LITE’s case. United States Steel Corporation (NYSE:X) is the most popular stock in this table. On the other hand Guardant Health, Inc. (NASDAQ:GH) is the least popular one with only 7 bullish hedge fund positions. Compared to these stocks Lumentum Holdings Inc (NASDAQ:LITE) is more popular among hedge funds. Our calculations showed that top 15 most popular stocks) among hedge funds returned 24.2% through April 22nd and outperformed the S&P 500 ETF (SPY) by more than 7 percentage points. Hedge funds were also right about betting on LITE as the stock returned 43.4% and outperformed the market by an even larger margin. Hedge funds were clearly right about piling into this stock relative to other stocks with similar market capitalizations.

Pabrai Investment Funds’ 2019 Q1 Investor Letter
Monthly Newsletter Strategy
Download a free copy of our newsletter and see the details inside!
Hedge Fund Resource Center
Related News
Is Lumentum Holdings Inc (LITE) Going to Burn These Hedge Funds? Lumentum Holdings Inc (LITE) Pulls Back To Support And Provides A Nice Risk/Reward Opportunity Is Lumentum Holdings Inc (LITE) A Good Stock To Buy? Was Quentec Asset Management Right to Bet on Micron Technology, Inc. (MU), Fabrinet (FN), & Others Here’s Why These Five Stocks Are in the Spotlight Big Things Are Expected of These Stocks Five Stocks that Are Surging While the Market is Mired in Red 20 Clever Bumble Bios for Guys 15 Most Physically Demanding Olympic Sports Hedge Funds Have Never Been This Bullish On Visa Inc (V)
Billionaire Hedge Funds