Lockheed Martin Corporation (NYSE:LMT) has seen a decrease in enthusiasm from smart money lately. Our calculations also showed that LMT isn’t among the 30 most popular stocks among hedge funds.

What does the smart money think about Lockheed Martin Corporation (NYSE:LMT)?

Heading into the second quarter of 2019, a total of 35 of the hedge funds tracked by Insider Monkey were long this stock, a change of -17% from the fourth quarter of 2018. The graph below displays the number of hedge funds with bullish position in LMT over the last 15 quarters. With hedge funds’ capital changing hands, there exists an “upper tier” of noteworthy hedge fund managers who were increasing their stakes meaningfully (or already accumulated large positions). 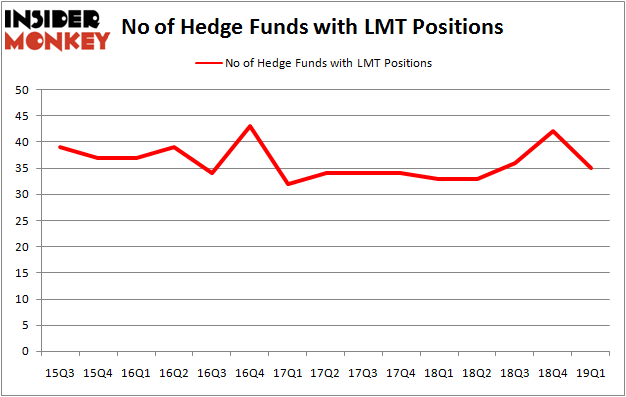 Of the funds tracked by Insider Monkey, Citadel Investment Group, managed by Ken Griffin, holds the number one position in Lockheed Martin Corporation (NYSE:LMT). Citadel Investment Group has a $233.3 million position in the stock, comprising 0.1% of its 13F portfolio. Coming in second is Two Sigma Advisors, managed by John Overdeck and David Siegel, which holds a $223.3 million position; 0.6% of its 13F portfolio is allocated to the company. Other professional money managers with similar optimism include Phill Gross and Robert Atchinson’s Adage Capital Management, Israel Englander’s Millennium Management and Cliff Asness’s AQR Capital Management.

Judging by the fact that Lockheed Martin Corporation (NYSE:LMT) has faced a decline in interest from the smart money, we can see that there lies a certain “tier” of funds who were dropping their positions entirely heading into Q3. At the top of the heap, Brandon Haley’s Holocene Advisors dropped the biggest investment of the 700 funds tracked by Insider Monkey, worth close to $71 million in stock, and Matt Simon (Citadel)’s Ashler Capital was right behind this move, as the fund sold off about $52.8 million worth. These bearish behaviors are interesting, as total hedge fund interest was cut by 7 funds heading into Q3.

As you can see these stocks had an average of 40 hedge funds with bullish positions and the average amount invested in these stocks was $2528 million. That figure was $1220 million in LMT’s case. Booking Holdings Inc. (NASDAQ:BKNG) is the most popular stock in this table. On the other hand Banco Santander (Brasil) SA (NYSE:BSBR) is the least popular one with only 10 bullish hedge fund positions. Lockheed Martin Corporation (NYSE:LMT) is not the least popular stock in this group but hedge fund interest is still below average. Our calculations showed that top 20 most popular stocks among hedge funds returned 1.9% in Q2 through May 30th and outperformed the S&P 500 ETF (SPY) by more than 3 percentage points. A small number of hedge funds were also right about betting on LMT as the stock returned 13.9% during the same time frame and outperformed the market by an even larger margin.