Did Hedge Funds Drop The Ball On Lear Corporation (LEA) ?

Is Lear Corporation (NYSE:LEA) an exceptional investment today? Hedge funds are in a bearish mood. The number of long hedge fund positions went down by 5 in recent months. Our calculations also showed that LEA isn’t among the 30 most popular stocks among hedge funds. 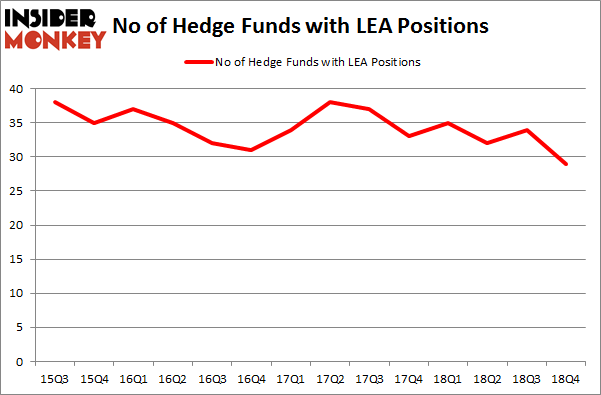 According to Insider Monkey’s hedge fund database, Pzena Investment Management, managed by Richard S. Pzena, holds the most valuable position in Lear Corporation (NYSE:LEA). Pzena Investment Management has a $339.9 million position in the stock, comprising 2% of its 13F portfolio. Sitting at the No. 2 spot is Cliff Asness of AQR Capital Management, with a $132 million position; 0.2% of its 13F portfolio is allocated to the stock. Other professional money managers that are bullish contain Israel Englander’s Millennium Management, Jim Simons’s Renaissance Technologies and John Overdeck and David Siegel’s Two Sigma Advisors.

Since Lear Corporation (NYSE:LEA) has experienced a decline in interest from hedge fund managers, logic holds that there exists a select few funds that decided to sell off their full holdings last quarter. Interestingly, Robert Polak’s Anchor Bolt Capital said goodbye to the biggest position of all the hedgies tracked by Insider Monkey, worth about $39.2 million in stock, and Dmitry Balyasny’s Balyasny Asset Management was right behind this move, as the fund cut about $37.9 million worth. These moves are interesting, as aggregate hedge fund interest fell by 5 funds last quarter.

As you can see these stocks had an average of 22 hedge funds with bullish positions and the average amount invested in these stocks was $399 million. That figure was $648 million in LEA’s case. Zions Bancorporation (NASDAQ:ZION) is the most popular stock in this table. On the other hand ASE Technology Holding Co., Ltd. (NYSE:ASX) is the least popular one with only 7 bullish hedge fund positions. Lear Corporation (NYSE:LEA) is not the most popular stock in this group but hedge fund interest is still above average. This is a slightly positive signal but we’d rather spend our time researching stocks that hedge funds are piling on. Our calculations showed that top 15 most popular stocks among hedge funds returned 21.3% through April 8th and outperformed the S&P 500 ETF (SPY) by more than 5 percentage points. A handful of hedge funds were also right about betting on LEA as the stock returned 24.9% and outperformed the market as well.