Did Hedge Funds Drop The Ball On Laboratory Corp. of America Holdings (LH) ?

After several tireless days we have finished crunching the numbers from nearly 750 13F filings issued by the elite hedge funds and other investment firms that we track at Insider Monkey, which disclosed those firms’ equity portfolios as of December 31. The results of that effort will be put on display in this article, as we share valuable insight into the smart money sentiment towards Laboratory Corp. of America Holdings (NYSE:LH).

Laboratory Corp. of America Holdings (NYSE:LH) was in 38 hedge funds’ portfolios at the end of December. LH has seen a decrease in enthusiasm from smart money in recent months. There were 40 hedge funds in our database with LH positions at the end of the previous quarter. Our calculations also showed that LH isn’t among the 30 most popular stocks among hedge funds.

How have hedgies been trading Laboratory Corp. of America Holdings (NYSE:LH)? 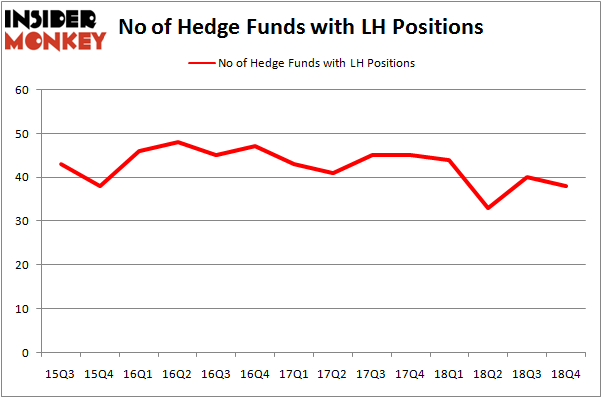 Since Laboratory Corp. of America Holdings (NYSE:LH) has witnessed declining sentiment from the aggregate hedge fund industry, it’s easy to see that there is a sect of funds who sold off their entire stakes by the end of the third quarter. At the top of the heap, Brian Ashford-Russell and Tim Woolley’s Polar Capital dropped the biggest stake of all the hedgies monitored by Insider Monkey, comprising about $45.2 million in stock. Zach Schreiber’s fund, Point State Capital, also dumped its stock, about $35.8 million worth. These moves are intriguing to say the least, as aggregate hedge fund interest dropped by 2 funds by the end of the third quarter.

As you can see these stocks had an average of 27.5 hedge funds with bullish positions and the average amount invested in these stocks was $552 million. That figure was $913 million in LH’s case. Synopsys, Inc. (NASDAQ:SNPS) is the most popular stock in this table. On the other hand Cincinnati Financial Corporation (NASDAQ:CINF) is the least popular one with only 22 bullish hedge fund positions. Compared to these stocks Laboratory Corp. of America Holdings (NYSE:LH) is more popular among hedge funds. Considering that hedge funds are fond of this stock in relation to its market cap peers, it may be a good idea to analyze it in detail and potentially include it in your portfolio. Our calculations showed that top 15 most popular stocks among hedge funds returned 19.7% through March 15th and outperformed the S&P 500 ETF (SPY) by 6.6 percentage points. A handful of hedge funds were also right about betting on LH as the stock returned 22.2% and outperformed the market as well.