Did Hedge Funds Drop The Ball On Kraton Corporation (KRA) ?

Is Kraton Corporation (NYSE:KRA) going to take off soon? Investors who are in the know are reducing their bets on the stock. The number of bullish hedge fund positions shrunk by 5 in recent months. Our calculations also showed that KRA isn’t among the 30 most popular stocks among hedge funds. KRA was in 17 hedge funds’ portfolios at the end of the fourth quarter of 2018. There were 22 hedge funds in our database with KRA positions at the end of the previous quarter.

How have hedgies been trading Kraton Corporation (NYSE:KRA)?

Heading into the first quarter of 2019, a total of 17 of the hedge funds tracked by Insider Monkey held long positions in this stock, a change of -23% from the previous quarter. On the other hand, there were a total of 22 hedge funds with a bullish position in KRA a year ago. With hedgies’ capital changing hands, there exists an “upper tier” of noteworthy hedge fund managers who were boosting their holdings considerably (or already accumulated large positions). 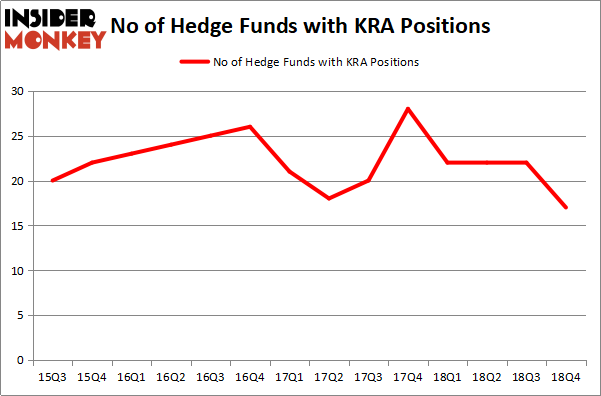 Of the funds tracked by Insider Monkey, Jim Simons’s Renaissance Technologies has the biggest position in Kraton Corporation (NYSE:KRA), worth close to $16.8 million, accounting for less than 0.1%% of its total 13F portfolio. The second largest stake is held by Royce & Associates, managed by Chuck Royce, which holds a $12.5 million position; the fund has 0.1% of its 13F portfolio invested in the stock. Remaining peers with similar optimism encompass Noam Gottesman’s GLG Partners, Jay Petschek and Steven Major’s Corsair Capital Management and Joel Greenblatt’s Gotham Asset Management.

Judging by the fact that Kraton Corporation (NYSE:KRA) has experienced falling interest from the entirety of the hedge funds we track, it’s easy to see that there is a sect of money managers that elected to cut their full holdings last quarter. At the top of the heap, David Rosen’s Rubric Capital Management dumped the biggest position of the 700 funds tracked by Insider Monkey, valued at an estimated $12.4 million in stock. Peter Algert and Kevin Coldiron’s fund, Algert Coldiron Investors, also dropped its stock, about $0.9 million worth. These bearish behaviors are interesting, as aggregate hedge fund interest fell by 5 funds last quarter.

As you can see these stocks had an average of 15.75 hedge funds with bullish positions and the average amount invested in these stocks was $68 million. That figure was $51 million in KRA’s case. ACCO Brands Corporation (NYSE:ACCO) is the most popular stock in this table. On the other hand Armada Hoffler Properties Inc (NYSE:AHH) is the least popular one with only 9 bullish hedge fund positions. Kraton Corporation (NYSE:KRA) is not the most popular stock in this group but hedge fund interest is still above average. Our calculations showed that top 15 most popular stocks) among hedge funds returned 24.2% through April 22nd and outperformed the S&P 500 ETF (SPY) by more than 7 percentage points. Hedge funds were also right about betting on KRA as the stock returned 65.5% and outperformed the market by an even larger margin. Hedge funds were rewarded for their relative bullishness.