Knight-Swift Transportation Holdings Inc. (NYSE:KNX) investors should be aware of a decrease in hedge fund sentiment of late. KNX was in 26 hedge funds’ portfolios at the end of the fourth quarter of 2018. There were 31 hedge funds in our database with KNX positions at the end of the previous quarter. Our calculations also showed that KNX isn’t among the 30 most popular stocks among hedge funds.

In the financial world there are plenty of gauges investors employ to value stocks. Two of the best gauges are hedge fund and insider trading moves. Our experts have shown that, historically, those who follow the best picks of the best money managers can outperform the market by a very impressive amount (see the details here). 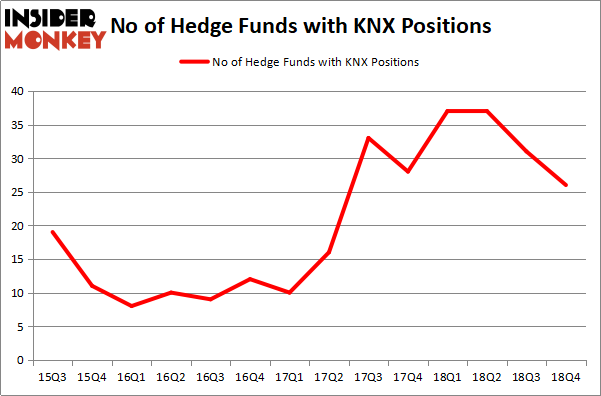 The largest stake in Knight-Swift Transportation Holdings Inc. (NYSE:KNX) was held by Luminus Management, which reported holding $93.4 million worth of stock at the end of September. It was followed by Impala Asset Management with a $74.4 million position. Other investors bullish on the company included 12th Street Asset Management, Millennium Management, and Anchor Bolt Capital.

Because Knight-Swift Transportation Holdings Inc. (NYSE:KNX) has faced declining sentiment from the aggregate hedge fund industry, it’s easy to see that there lies a certain “tier” of hedge funds that elected to cut their positions entirely in the third quarter. It’s worth mentioning that Mike Masters’s Masters Capital Management cut the biggest stake of the “upper crust” of funds watched by Insider Monkey, worth close to $17.2 million in stock. Philip Hempleman’s fund, Ardsley Partners, also said goodbye to its stock, about $17.2 million worth. These bearish behaviors are intriguing to say the least, as total hedge fund interest was cut by 5 funds in the third quarter.

As you can see these stocks had an average of 18.75 hedge funds with bullish positions and the average amount invested in these stocks was $274 million. That figure was $299 million in KNX’s case. AGCO Corporation (NYSE:AGCO) is the most popular stock in this table. On the other hand Prosperity Bancshares, Inc. (NYSE:PB) is the least popular one with only 9 bullish hedge fund positions. Knight-Swift Transportation Holdings Inc. (NYSE:KNX) is not the most popular stock in this group but hedge fund interest is still above average. Our calculations showed that top 15 most popular stocks) among hedge funds returned 24.2% through April 22nd and outperformed the S&P 500 ETF (SPY) by more than 7 percentage points. Hedge funds were also right about betting on KNX as the stock returned 38.7% and outperformed the market by an even larger margin. Hedge funds were rewarded for their relative bullishness.