Kimco Realty Corp (NYSE:KIM) has seen a decrease in hedge fund interest in recent months. KIM was in 16 hedge funds’ portfolios at the end of December. There were 17 hedge funds in our database with KIM positions at the end of the previous quarter. Our calculations also showed that KIM isn’t among the 30 most popular stocks among hedge funds.

To most shareholders, hedge funds are viewed as underperforming, outdated investment vehicles of the past. While there are over 8000 funds trading at the moment, Our experts hone in on the top tier of this group, around 750 funds. Most estimates calculate that this group of people preside over bulk of the smart money’s total capital, and by shadowing their matchless equity investments, Insider Monkey has formulated a number of investment strategies that have historically beaten Mr. Market. Insider Monkey’s flagship hedge fund strategy beat the S&P 500 index by nearly 5 percentage points a year since its inception in May 2014 through early November 2018. We were able to generate large returns even by identifying short candidates. Our portfolio of short stocks lost 27.5% since February 2017 (through March 12th) even though the market was up nearly 25% during the same period. We just shared a list of 6 short targets in our latest quarterly update and they are already down an average of 6% in less than a month.

How have hedgies been trading Kimco Realty Corp (NYSE:KIM)?

At the end of the fourth quarter, a total of 16 of the hedge funds tracked by Insider Monkey were long this stock, a change of -6% from the second quarter of 2018. Below, you can check out the change in hedge fund sentiment towards KIM over the last 14 quarters. With hedgies’ sentiment swirling, there exists a few key hedge fund managers who were adding to their holdings substantially (or already accumulated large positions). 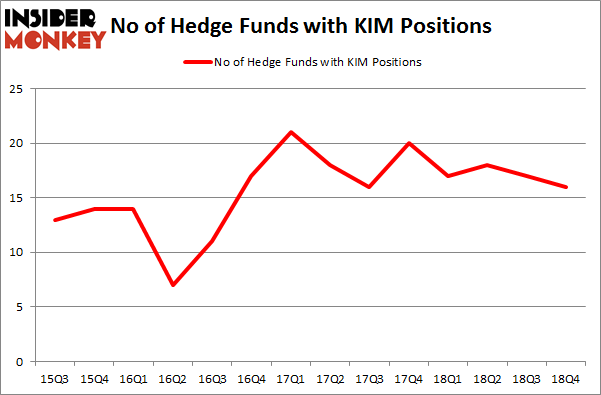 According to publicly available hedge fund and institutional investor holdings data compiled by Insider Monkey, Jim Simons’s Renaissance Technologies has the largest position in Kimco Realty Corp (NYSE:KIM), worth close to $41.8 million, corresponding to less than 0.1%% of its total 13F portfolio. Coming in second is Marshall Wace LLP, managed by Paul Marshall and Ian Wace, which holds a $14.2 million position; 0.1% of its 13F portfolio is allocated to the company. Other professional money managers that are bullish comprise Israel Englander’s Millennium Management, Phill Gross and Robert Atchinson’s Adage Capital Management and Ray Dalio’s Bridgewater Associates.

Seeing as Kimco Realty Corp (NYSE:KIM) has experienced a decline in interest from the smart money, it’s safe to say that there was a specific group of money managers who were dropping their entire stakes last quarter. It’s worth mentioning that Thomas E. Claugus’s GMT Capital said goodbye to the largest position of the “upper crust” of funds watched by Insider Monkey, comprising about $14.2 million in stock. Daniel Arbess’s fund, Perella Weinberg Partners, also cut its stock, about $3.2 million worth. These bearish behaviors are important to note, as aggregate hedge fund interest was cut by 1 funds last quarter.

As you can see these stocks had an average of 21.75 hedge funds with bullish positions and the average amount invested in these stocks was $509 million. That figure was $79 million in KIM’s case. CDK Global Inc (NASDAQ:CDK) is the most popular stock in this table. On the other hand Autoliv Inc. (NYSE:ALV) is the least popular one with only 13 bullish hedge fund positions. Kimco Realty Corp (NYSE:KIM) is not the least popular stock in this group but hedge fund interest is still below average. This is a slightly negative signal and we’d rather spend our time researching stocks that hedge funds are piling on. Our calculations showed that top 15 most popular stocks among hedge funds returned 21.3% through April 8th and outperformed the S&P 500 ETF (SPY) by more than 5 percentage points. Hedge funds were also right about betting on KIM as the stock returned 26.8% and outperformed the market as well.