Hedge fund interest in Kennametal Inc. (NYSE:KMT) shares was flat at the end of last quarter. This is usually a negative indicator. At the end of this article we will also compare KMT to other stocks including NCR Corporation (NYSE:NCR), White Mountains Insurance Group Ltd (NYSE:WTM), and Fulton Financial Corp (NASDAQ:FULT) to get a better sense of its popularity.

At the moment there are several formulas stock market investors have at their disposal to value publicly traded companies. A pair of the most under-the-radar formulas are hedge fund and insider trading moves. We have shown that, historically, those who follow the top picks of the elite money managers can outperform the market by a superb margin (see the details here). 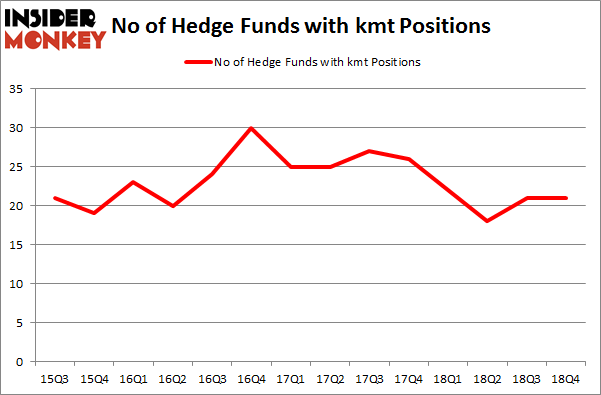 According to publicly available hedge fund and institutional investor holdings data compiled by Insider Monkey, Ariel Investments, managed by John W. Rogers, holds the number one position in Kennametal Inc. (NYSE:KMT). Ariel Investments has a $181.4 million position in the stock, comprising 2.5% of its 13F portfolio. Coming in second is Renaissance Technologies, managed by Jim Simons, which holds a $28.6 million position; the fund has less than 0.1%% of its 13F portfolio invested in the stock. Other professional money managers with similar optimism consist of Mario Gabelli’s GAMCO Investors, Clint Carlson’s Carlson Capital and Israel Englander’s Millennium Management.

Seeing as Kennametal Inc. (NYSE:KMT) has faced bearish sentiment from the smart money, we can see that there were a few fund managers that slashed their entire stakes last quarter. Interestingly, Noam Gottesman’s GLG Partners cut the largest investment of all the hedgies followed by Insider Monkey, comprising close to $8.5 million in stock, and Ilya Boroditsky’s Precision Path Capital was right behind this move, as the fund cut about $6.3 million worth. These transactions are interesting, as aggregate hedge fund interest stayed the same (this is a bearish signal in our experience).

As you can see these stocks had an average of 16 hedge funds with bullish positions and the average amount invested in these stocks was $93 million. That figure was $275 million in KMT’s case. NCR Corporation (NYSE:NCR) is the most popular stock in this table. On the other hand Fulton Financial Corp (NASDAQ:FULT) is the least popular one with only 12 bullish hedge fund positions. Compared to these stocks Kennametal Inc. (NYSE:KMT) is more popular among hedge funds. Our calculations showed that top 15 most popular stocks) among hedge funds returned 24.2% through April 22nd and outperformed the S&P 500 ETF (SPY) by more than 7 percentage points. Hedge funds were also right about betting on KMT as the stock returned 24.4% and outperformed the market by an even larger margin. Hedge funds were clearly right about piling into this stock relative to other stocks with similar market capitalizations.