Did Hedge Funds Drop The Ball On John B. Sanfilippo & Son, Inc. (JBSS) ?

We are still in an overall bull market and many stocks that smart money investors were piling into surged through October 17th. Among them, Facebook and Microsoft ranked among the top 3 picks and these stocks gained 45% and 39% respectively. Hedge funds’ top 3 stock picks returned 34.4% this year and beat the S&P 500 ETFs by 13 percentage points. Investing in index funds guarantees you average returns, not superior returns. We are looking to generate superior returns for our readers. That’s why we believe it isn’t a waste of time to check out hedge fund sentiment before you invest in a stock like John B. Sanfilippo & Son, Inc. (NASDAQ:JBSS).

Is John B. Sanfilippo & Son, Inc. (NASDAQ:JBSS) a sound stock to buy now? Investors who are in the know are selling. The number of long hedge fund bets decreased by 1 in recent months. Our calculations also showed that JBSS isn’t among the 30 most popular stocks among hedge funds (see the video below).

In today’s marketplace there are plenty of methods market participants have at their disposal to value stocks. A duo of the less known methods are hedge fund and insider trading signals. We have shown that, historically, those who follow the top picks of the elite money managers can outclass the S&P 500 by a healthy amount (see the details here).

What have hedge funds been doing with John B. Sanfilippo & Son, Inc. (NASDAQ:JBSS)?

At Q2’s end, a total of 10 of the hedge funds tracked by Insider Monkey held long positions in this stock, a change of -9% from the first quarter of 2019. By comparison, 12 hedge funds held shares or bullish call options in JBSS a year ago. With hedgies’ capital changing hands, there exists a few notable hedge fund managers who were adding to their holdings considerably (or already accumulated large positions). 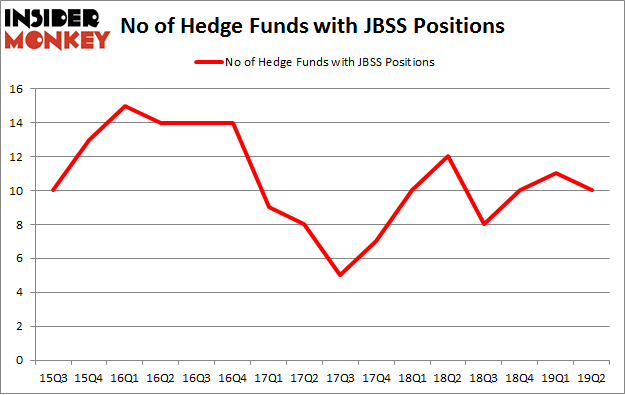 More specifically, Royce & Associates was the largest shareholder of John B. Sanfilippo & Son, Inc. (NASDAQ:JBSS), with a stake worth $83.7 million reported as of the end of March. Trailing Royce & Associates was AQR Capital Management, which amassed a stake valued at $5.8 million. GAMCO Investors, Winton Capital Management, and Two Sigma Advisors were also very fond of the stock, giving the stock large weights in their portfolios.

Since John B. Sanfilippo & Son, Inc. (NASDAQ:JBSS) has faced a decline in interest from the smart money, it’s easy to see that there is a sect of hedge funds that slashed their positions entirely last quarter. Intriguingly, Andrew Feldstein and Stephen Siderow’s Blue Mountain Capital dumped the biggest position of all the hedgies monitored by Insider Monkey, comprising close to $0.7 million in stock. Paul Tudor Jones’s fund, Tudor Investment Corp, also said goodbye to its stock, about $0.2 million worth. These transactions are important to note, as total hedge fund interest fell by 1 funds last quarter.

Let’s go over hedge fund activity in other stocks – not necessarily in the same industry as John B. Sanfilippo & Son, Inc. (NASDAQ:JBSS) but similarly valued. We will take a look at Stoke Therapeutics, Inc. (NASDAQ:STOK), Tupperware Brands Corporation (NYSE:TUP), Carrizo Oil & Gas, Inc. (NASDAQ:CRZO), and Social Capital Hedosophia Holdings Corp. (NYSE:IPOA). All of these stocks’ market caps are closest to JBSS’s market cap.

As you can see these stocks had an average of 17 hedge funds with bullish positions and the average amount invested in these stocks was $175 million. That figure was $95 million in JBSS’s case. Social Capital Hedosophia Holdings Corp. (NYSE:IPOA) is the most popular stock in this table. On the other hand Carrizo Oil & Gas, Inc. (NASDAQ:CRZO) is the least popular one with only 10 bullish hedge fund positions. Compared to these stocks John B. Sanfilippo & Son, Inc. (NASDAQ:JBSS) is even less popular than CRZO. Hedge funds clearly dropped the ball on JBSS as the stock delivered strong returns, though hedge funds’ consensus picks still generated respectable returns. Our calculations showed that top 20 most popular stocks among hedge funds returned 24.4% in 2019 through September 30th and outperformed the S&P 500 ETF (SPY) by 4 percentage points. A small number of hedge funds were also right about betting on JBSS as the stock returned 25.6% during the third quarter and outperformed the market by an even larger margin.