Is Janus Henderson Group plc (NYSE:JHG) a good place to invest some of your money right now? We can gain invaluable insight to help us answer that question by studying the investment trends of top investors, who employ world-class Ivy League graduates, who are given immense resources and industry contacts to put their financial expertise to work. The top picks of these firms have historically outperformed the market when we account for known risk factors, making them very valuable investment ideas.

Janus Henderson Group plc (NYSE:JHG) has experienced a decrease in support from the world’s most elite money managers in recent months. Our calculations also showed that JHG isn’t among the 30 most popular stocks among hedge funds.

How have hedgies been trading Janus Henderson Group plc (NYSE:JHG)?

Heading into the first quarter of 2019, a total of 15 of the hedge funds tracked by Insider Monkey were long this stock, a change of -12% from the previous quarter. On the other hand, there were a total of 11 hedge funds with a bullish position in JHG a year ago. With the smart money’s positions undergoing their usual ebb and flow, there exists a select group of notable hedge fund managers who were boosting their holdings substantially (or already accumulated large positions). 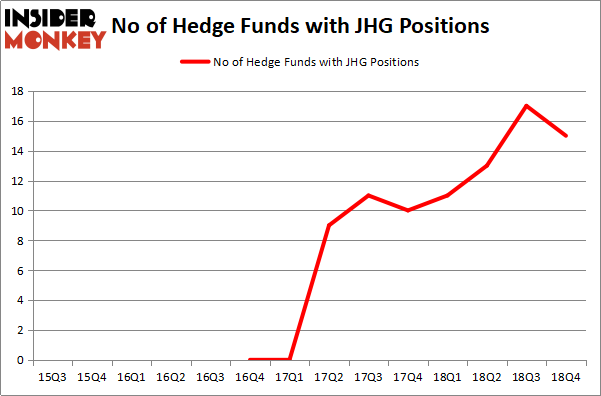 More specifically, Ariel Investments was the largest shareholder of Janus Henderson Group plc (NYSE:JHG), with a stake worth $48.9 million reported as of the end of September. Trailing Ariel Investments was Fisher Asset Management, which amassed a stake valued at $32 million. GAMCO Investors, Citadel Investment Group, and Renaissance Technologies were also very fond of the stock, giving the stock large weights in their portfolios.

Judging by the fact that Janus Henderson Group plc (NYSE:JHG) has faced declining sentiment from the entirety of the hedge funds we track, we can see that there were a few hedge funds who were dropping their positions entirely last quarter. It’s worth mentioning that Michael Platt and William Reeves’s BlueCrest Capital Mgmt. dumped the biggest stake of the 700 funds followed by Insider Monkey, valued at about $0.8 million in stock. Ben Levine, Andrew Manuel and Stefan Renold’s fund, LMR Partners, also cut its stock, about $0.6 million worth. These moves are important to note, as total hedge fund interest was cut by 2 funds last quarter.

As you can see these stocks had an average of 23 hedge funds with bullish positions and the average amount invested in these stocks was $475 million. That figure was $132 million in JHG’s case. Manpowergroup Inc (NYSE:MAN) is the most popular stock in this table. On the other hand Choice Hotels International, Inc. (NYSE:CHH) is the least popular one with only 19 bullish hedge fund positions. Compared to these stocks Janus Henderson Group plc (NYSE:JHG) is even less popular than CHH. Hedge funds clearly dropped the ball on JHG as the stock delivered strong returns, though hedge funds’ consensus picks still generated respectable returns. Our calculations showed that top 15 most popular stocks) among hedge funds returned 24.2% through April 22nd and outperformed the S&P 500 ETF (SPY) by more than 7 percentage points. A small number of hedge funds were also right about betting on JHG as the stock returned 25.4% and outperformed the market by an even larger margin.