Most investors tend to think that hedge funds and other asset managers are worthless, as they cannot beat even simple index fund portfolios. In fact, most people expect hedge funds to compete with and outperform the bull market that we have witnessed in recent years. However, hedge funds are generally partially hedged and aim at delivering attractive risk-adjusted returns rather than following the ups and downs of equity markets hoping that they will outperform the broader market. Our research shows that certain hedge funds do have great stock picking skills (and we can identify these hedge funds in advance pretty accurately), so let’s take a glance at the smart money sentiment towards Ironwood Pharmaceuticals, Inc. (NASDAQ:IRWD).

Hedge fund interest in Ironwood Pharmaceuticals, Inc. (NASDAQ:IRWD) shares was flat at the end of last quarter. This is usually a negative indicator. The level and the change in hedge fund popularity aren’t the only variables you need to analyze to decipher hedge funds’ perspectives. A stock may witness a boost in popularity but it may still be less popular than similarly priced stocks. That’s why at the end of this article we will examine companies such as Harsco Corporation (NYSE:HSC), Plexus Corp. (NASDAQ:PLXS), and Progress Software Corporation (NASDAQ:PRGS) to gather more data points.

At Q4’s end, a total of 17 of the hedge funds tracked by Insider Monkey were long this stock, a change of 0% from the second quarter of 2018. The graph below displays the number of hedge funds with bullish position in IRWD over the last 14 quarters. With hedge funds’ positions undergoing their usual ebb and flow, there exists an “upper tier” of noteworthy hedge fund managers who were upping their stakes substantially (or already accumulated large positions). 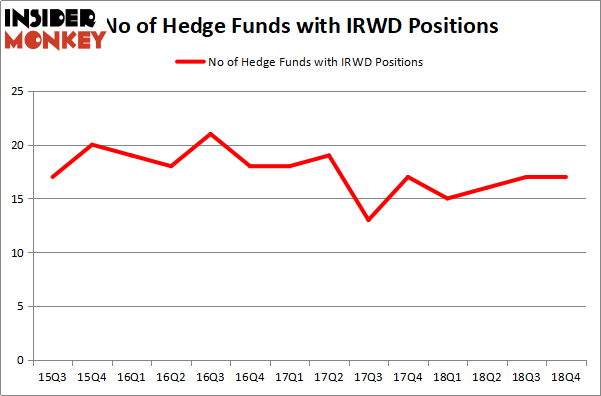 According to publicly available hedge fund and institutional investor holdings data compiled by Insider Monkey, Alex Denner’s Sarissa Capital Management has the largest position in Ironwood Pharmaceuticals, Inc. (NASDAQ:IRWD), worth close to $64.8 million, accounting for 14.4% of its total 13F portfolio. The second most bullish fund manager is EcoR1 Capital, managed by Oleg Nodelman, which holds a $55.8 million position; 5.6% of its 13F portfolio is allocated to the company. Some other hedge funds and institutional investors with similar optimism consist of Farhad Nanji and Michael DeMichele’s MFN Partners, Roberto Mignone’s Bridger Management and Samuel Isaly’s OrbiMed Advisors.

Because Ironwood Pharmaceuticals, Inc. (NASDAQ:IRWD) has faced bearish sentiment from the entirety of the hedge funds we track, logic holds that there lies a certain “tier” of funds that slashed their positions entirely in the third quarter. It’s worth mentioning that Peter S. Park’s Park West Asset Management cut the largest position of the 700 funds monitored by Insider Monkey, comprising an estimated $22.1 million in stock. Howard Marks’s fund, Oaktree Capital Management, also dumped its stock, about $10.7 million worth. These transactions are interesting, as aggregate hedge fund interest stayed the same (this is a bearish signal in our experience).

As you can see these stocks had an average of 17.25 hedge funds with bullish positions and the average amount invested in these stocks was $124 million. That figure was $306 million in IRWD’s case. Harsco Corporation (NYSE:HSC) is the most popular stock in this table. On the other hand Pacific Premier Bancorp, Inc. (NASDAQ:PPBI) is the least popular one with only 9 bullish hedge fund positions. Ironwood Pharmaceuticals, Inc. (NASDAQ:IRWD) is not the least popular stock in this group but hedge fund interest is still below average. Our calculations showed that top 15 most popular stocks) among hedge funds returned 24.2% through April 22nd and outperformed the S&P 500 ETF (SPY) by more than 7 percentage points. A small number of hedge funds were also right about betting on IRWD as the stock returned 31.8% and outperformed the market by an even larger margin.