Investing in small cap stocks has historically been a way to outperform the market, as small cap companies typically grow faster on average than the blue chips. That outperformance comes with a price, however, as there are occasional periods of higher volatility. The fourth quarter of 2018 is one of those periods, as the Russell 2000 ETF (IWM) has underperformed the larger S&P 500 ETF (SPY) by nearly 7 percentage points. Given that the funds we track tend to have a disproportionate amount of their portfolios in smaller cap stocks, they have seen some volatility in their portfolios too. Actually their moves are potentially one of the factors that contributed to this volatility. In this article, we use our extensive database of hedge fund holdings to find out what the smart money thinks of IPG Photonics Corporation (NASDAQ:IPGP).

IPG Photonics Corporation (NASDAQ:IPGP) shares haven’t seen a lot of action during the third quarter. Overall, hedge fund sentiment was unchanged. The stock was in 16 hedge funds’ portfolios at the end of the fourth quarter of 2018. The level and the change in hedge fund popularity aren’t the only variables you need to analyze to decipher hedge funds’ perspectives. A stock may witness a boost in popularity but it may still be less popular than similarly priced stocks. That’s why at the end of this article we will examine companies such as WEX Inc (NYSE:WEX), EQT GP Holdings LP (NYSE:EQGP), and Store Capital Corporation (NYSE:STOR) to gather more data points.

To most traders, hedge funds are perceived as worthless, old investment vehicles of the past. While there are more than 8000 funds in operation today, Our researchers choose to focus on the aristocrats of this club, about 750 funds. These money managers control most of the hedge fund industry’s total asset base, and by keeping an eye on their first-class picks, Insider Monkey has uncovered many investment strategies that have historically surpassed the S&P 500 index. Insider Monkey’s flagship hedge fund strategy beat the S&P 500 index by nearly 5 percentage points a year since its inception in May 2014 through early November 2018. We were able to generate large returns even by identifying short candidates. Our portfolio of short stocks lost 27.5% since February 2017 (through March 12th) even though the market was up nearly 25% during the same period. We just shared a list of 6 short targets in our latest quarterly update and they are already down an average of 6% in less than a month. 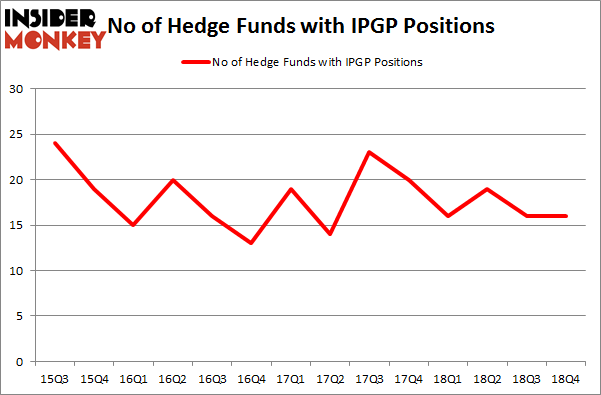 The largest stake in IPG Photonics Corporation (NASDAQ:IPGP) was held by Two Sigma Advisors, which reported holding $39 million worth of stock at the end of September. It was followed by Renaissance Technologies with a $32.1 million position. Other investors bullish on the company included Royce & Associates, Fisher Asset Management, and Highbridge Capital Management.

Because IPG Photonics Corporation (NASDAQ:IPGP) has faced falling interest from the aggregate hedge fund industry, it’s easy to see that there were a few hedge funds that decided to sell off their full holdings heading into Q3. Interestingly, Ken Griffin’s Citadel Investment Group sold off the largest position of all the hedgies monitored by Insider Monkey, comprising about $39.7 million in stock. Fang Zheng’s fund, Keywise Capital Management, also said goodbye to its stock, about $32.4 million worth. These transactions are interesting, as total hedge fund interest stayed the same (this is a bearish signal in our experience).

As you can see these stocks had an average of 20.75 hedge funds with bullish positions and the average amount invested in these stocks was $416 million. That figure was $131 million in IPGP’s case. WEX Inc (NYSE:WEX) is the most popular stock in this table. On the other hand EQT GP Holdings LP (NYSE:EQGP) is the least popular one with only 3 bullish hedge fund positions. IPG Photonics Corporation (NASDAQ:IPGP) is not the least popular stock in this group but hedge fund interest is still below average. This is a slightly negative signal and we’d rather spend our time researching stocks that hedge funds are piling on. In this regard WEX might be a better candidate to consider a long position. ur calculations showed that top 15 most popular stocks among hedge funds returned 21.3% through April 8th and outperformed the S&P 500 ETF (SPY) by more than 5 percentage points. Hedge funds were also right about betting on IPGP as the stock returned 49.1% and outperformed the market as well.