Intercontinental Exchange Inc (NYSE:ICE) was in 35 hedge funds’ portfolios at the end of March. ICE has experienced a decrease in hedge fund interest of late. There were 41 hedge funds in our database with ICE holdings at the end of the previous quarter. Our calculations also showed that ICE isn’t among the 30 most popular stocks among hedge funds.

What does the smart money think about Intercontinental Exchange Inc (NYSE:ICE)?

At the end of the first quarter, a total of 35 of the hedge funds tracked by Insider Monkey held long positions in this stock, a change of -15% from the previous quarter. The graph below displays the number of hedge funds with bullish position in ICE over the last 15 quarters. With hedgies’ capital changing hands, there exists a few key hedge fund managers who were boosting their holdings significantly (or already accumulated large positions). 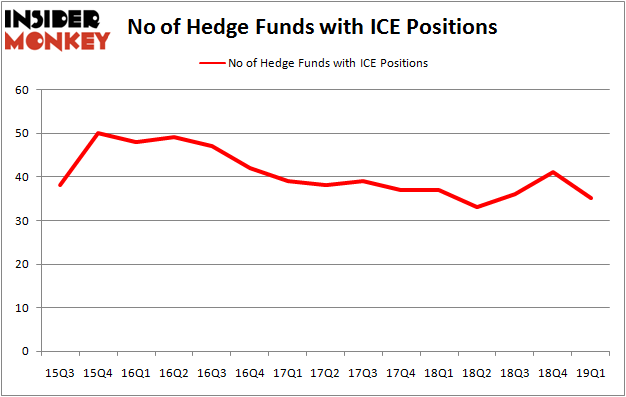 The largest stake in Intercontinental Exchange Inc (NYSE:ICE) was held by Cantillon Capital Management, which reported holding $355.3 million worth of stock at the end of March. It was followed by D E Shaw with a $348.9 million position. Other investors bullish on the company included Eminence Capital, Alkeon Capital Management, and Senator Investment Group.

Due to the fact that Intercontinental Exchange Inc (NYSE:ICE) has faced bearish sentiment from hedge fund managers, it’s safe to say that there lies a certain “tier” of hedgies who sold off their entire stakes by the end of the third quarter. Interestingly, David Cohen and Harold Levy’s Iridian Asset Management sold off the largest position of the “upper crust” of funds followed by Insider Monkey, comprising close to $269.2 million in stock. James Parsons’s fund, Junto Capital Management, also dumped its stock, about $76.2 million worth. These transactions are interesting, as total hedge fund interest was cut by 6 funds by the end of the third quarter.

As you can see these stocks had an average of 26.5 hedge funds with bullish positions and the average amount invested in these stocks was $873 million. That figure was $1778 million in ICE’s case. Kimberly Clark Corporation (NYSE:KMB) is the most popular stock in this table. On the other hand Orange S.A. (NYSE:ORAN) is the least popular one with only 2 bullish hedge fund positions. Intercontinental Exchange Inc (NYSE:ICE) is not the most popular stock in this group but hedge fund interest is still above average. Our calculations showed that top 20 most popular stocks among hedge funds returned 1.9% in Q2 through May 30th and outperformed the S&P 500 ETF (SPY) by more than 3 percentage points. Hedge funds were also right about betting on ICE as the stock returned 8.5% during the same period and outperformed the market by an even larger margin. Hedge funds were rewarded for their relative bullishness.