Did Hedge Funds Drop The Ball On Insmed Incorporated (INSM) ?

We at Insider Monkey have gone over 700 13F filings that hedge funds and prominent investors are required to file by the SEC. The 13F filings show the funds’ and investors’ portfolio positions as of December 31st. In this article we look at what those investors think of Insmed Incorporated (NASDAQ:INSM).

Is Insmed Incorporated (NASDAQ:INSM) undervalued? Prominent investors are reducing their bets on the stock. The number of bullish hedge fund bets were trimmed by 1 in recent months. Our calculations also showed that INSM isn’t among the 30 most popular stocks among hedge funds.

At the end of the fourth quarter, a total of 16 of the hedge funds tracked by Insider Monkey held long positions in this stock, a change of -6% from the previous quarter. Below, you can check out the change in hedge fund sentiment towards INSM over the last 14 quarters. So, let’s review which hedge funds were among the top holders of the stock and which hedge funds were making big moves. 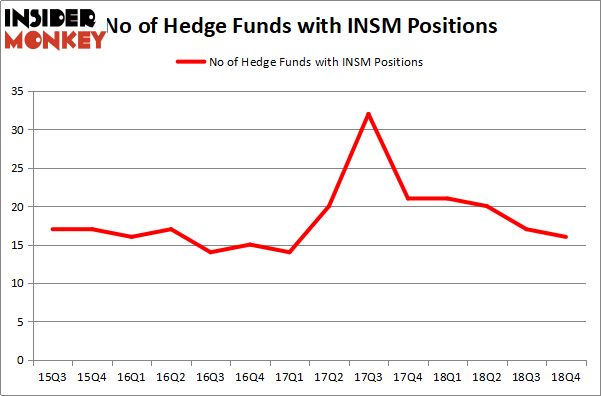 Among these funds, Palo Alto Investors held the most valuable stake in Insmed Incorporated (NASDAQ:INSM), which was worth $100.4 million at the end of the fourth quarter. On the second spot was Baker Bros. Advisors which amassed $24.3 million worth of shares. Moreover, Rock Springs Capital Management, Nexthera Capital, and Polar Capital were also bullish on Insmed Incorporated (NASDAQ:INSM), allocating a large percentage of their portfolios to this stock.

Judging by the fact that Insmed Incorporated (NASDAQ:INSM) has faced a decline in interest from the entirety of the hedge funds we track, we can see that there is a sect of funds that slashed their positions entirely in the third quarter. Intriguingly, Samuel Isaly’s OrbiMed Advisors said goodbye to the biggest investment of the 700 funds tracked by Insider Monkey, totaling about $37 million in stock. Ken Greenberg and David Kim’s fund, Ghost Tree Capital, also dropped its stock, about $0.5 million worth. These moves are important to note, as aggregate hedge fund interest was cut by 1 funds in the third quarter.

As you can see these stocks had an average of 15.25 hedge funds with bullish positions and the average amount invested in these stocks was $128 million. That figure was $196 million in INSM’s case. KEMET Corporation (NYSE:KEM) is the most popular stock in this table. On the other hand Group 1 Automotive, Inc. (NYSE:GPI) is the least popular one with only 9 bullish hedge fund positions. Insmed Incorporated (NASDAQ:INSM) is not the most popular stock in this group but hedge fund interest is still above average. Our calculations showed that top 15 most popular stocks) among hedge funds returned 24.2% through April 22nd and outperformed the S&P 500 ETF (SPY) by more than 7 percentage points. Hedge funds were also right about betting on INSM as the stock returned 132.7% and outperformed the market by an even larger margin. Hedge funds were rewarded for their relative bullishness.