Did Hedge Funds Drop The Ball On IMAX Corporation (IMAX) ?

There are several ways to beat the market, and investing in small cap stocks has historically been one of them. We like to improve the odds of beating the market further by examining what famous hedge fund operators such as Jeff Ubben, George Soros and Carl Icahn think. Those hedge fund operators make billions of dollars each year by hiring the best and the brightest to do research on stocks, including small cap stocks that big brokerage houses simply don’t cover. Because of Carl Icahn and other elite funds’ exemplary historical records, we pay attention to their small cap picks. In this article, we use hedge fund filing data to analyze IMAX Corporation (NYSE:IMAX).

Hedge fund interest in IMAX Corporation (NYSE:IMAX) shares was flat at the end of last quarter. This is usually a negative indicator. At the end of this article we will also compare IMAX to other stocks including Nevro Corp (NYSE:NVRO), Sangamo Therapeutics, Inc. (NASDAQ:SGMO), and Frank’s International N.V. (NYSE:FI) to get a better sense of its popularity.

What have hedge funds been doing with IMAX Corporation (NYSE:IMAX)? 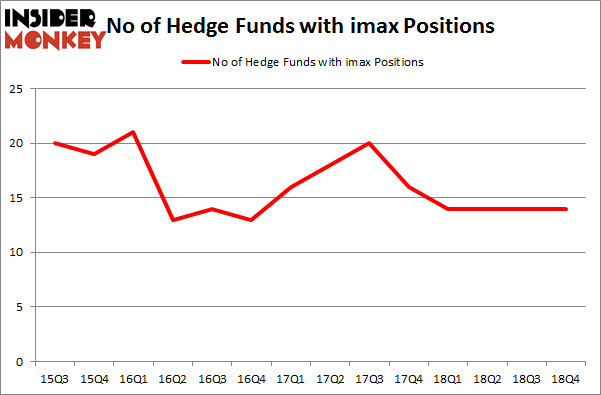 According to Insider Monkey’s hedge fund database, Two Sigma Advisors, managed by John Overdeck and David Siegel, holds the number one position in IMAX Corporation (NYSE:IMAX). Two Sigma Advisors has a $7 million position in the stock, comprising less than 0.1%% of its 13F portfolio. The second largest stake is held by Point72 Asset Management, managed by Steve Cohen, which holds a $5.7 million position; the fund has less than 0.1%% of its 13F portfolio invested in the stock. Some other members of the smart money that hold long positions consist of Noam Gottesman’s GLG Partners, David Forster and Peter Wilton’s IBIS Capital Partners and Richard McGuire’s Marcato Capital Management.

Judging by the fact that IMAX Corporation (NYSE:IMAX) has witnessed a decline in interest from the smart money, we can see that there was a specific group of money managers who were dropping their entire stakes heading into Q3. Intriguingly, Ken Griffin’s Citadel Investment Group said goodbye to the biggest investment of the “upper crust” of funds monitored by Insider Monkey, comprising an estimated $3.6 million in stock. Jack Ripsteen’s fund, Potrero Capital Research, also dumped its stock, about $3.2 million worth. These transactions are important to note, as aggregate hedge fund interest stayed the same (this is a bearish signal in our experience).

As you can see these stocks had an average of 17.5 hedge funds with bullish positions and the average amount invested in these stocks was $128 million. That figure was $28 million in IMAX’s case. Sangamo Therapeutics, Inc. (NASDAQ:SGMO) is the most popular stock in this table. On the other hand Frank’s International N.V. (NYSE:FI) is the least popular one with only 12 bullish hedge fund positions. IMAX Corporation (NYSE:IMAX) is not the least popular stock in this group but hedge fund interest is still below average. Our calculations showed that top 15 most popular stocks) among hedge funds returned 24.2% through April 22nd and outperformed the S&P 500 ETF (SPY) by more than 7 percentage points. A small number of hedge funds were also right about betting on IMAX as the stock returned 33.4% and outperformed the market by an even larger margin.