Did Hedge Funds Drop The Ball On HUYA Inc. (HUYA) ?

The 700+ hedge funds and money managers tracked by Insider Monkey have already compiled and submitted their 13F filings for the fourth quarter, which unveil their equity positions as of December 31. We went through these filings, fixed typos and other more significant errors and identified the changes in hedge fund positions. Our extensive review of these public filings is finally over, so this article is set to reveal the smart money sentiment towards HUYA Inc. (NYSE:HUYA).

HUYA Inc. (NYSE:HUYA) was in 16 hedge funds’ portfolios at the end of the fourth quarter of 2018. HUYA investors should be aware of a decrease in enthusiasm from smart money lately. There were 17 hedge funds in our database with HUYA holdings at the end of the previous quarter. Our calculations also showed that huya isn’t among the 30 most popular stocks among hedge funds.

How have hedgies been trading HUYA Inc. (NYSE:HUYA)?

At Q4’s end, a total of 16 of the hedge funds tracked by Insider Monkey were bullish on this stock, a change of -6% from one quarter earlier. Below, you can check out the change in hedge fund sentiment towards HUYA over the last 14 quarters. With hedge funds’ sentiment swirling, there exists a select group of notable hedge fund managers who were upping their holdings significantly (or already accumulated large positions). 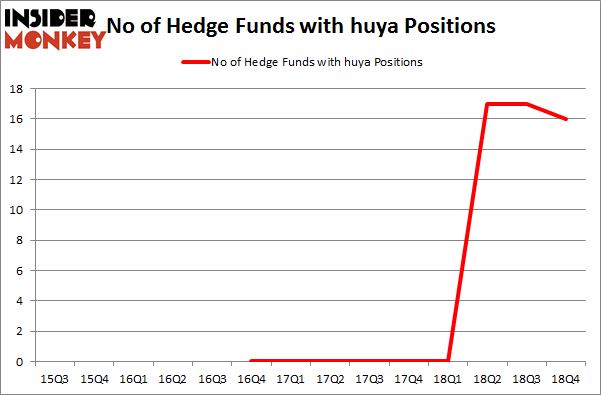 Among these funds, Alkeon Capital Management held the most valuable stake in HUYA Inc. (NYSE:HUYA), which was worth $36.7 million at the end of the third quarter. On the second spot was D1 Capital Partners which amassed $32 million worth of shares. Moreover, Sylebra Capital Management, Kerrisdale Capital, and Jericho Capital Asset Management were also bullish on HUYA Inc. (NYSE:HUYA), allocating a large percentage of their portfolios to this stock.

Since HUYA Inc. (NYSE:HUYA) has faced a decline in interest from the aggregate hedge fund industry, logic holds that there was a specific group of funds who were dropping their entire stakes in the third quarter. It’s worth mentioning that David Halpert’s Prince Street Capital Management cut the largest position of the 700 funds monitored by Insider Monkey, valued at close to $22 million in stock. Philippe Laffont’s fund, Coatue Management, also sold off its stock, about $20 million worth. These bearish behaviors are interesting, as total hedge fund interest dropped by 1 funds in the third quarter.

As you can see these stocks had an average of 28 hedge funds with bullish positions and the average amount invested in these stocks was $482 million. That figure was $150 million in HUYA’s case. Louisiana-Pacific Corporation (NYSE:LPX) is the most popular stock in this table. On the other hand GW Pharmaceuticals plc (NASDAQ:GWPH) is the least popular one with only 25 bullish hedge fund positions. Compared to these stocks HUYA Inc. (NYSE:HUYA) is even less popular than GWPH. Hedge funds clearly dropped the ball on HUYA as the stock delivered strong returns, though hedge funds’ consensus picks still generated respectable returns. Our calculations showed that top 15 most popular stocks) among hedge funds returned 24.2% through April 22nd and outperformed the S&P 500 ETF (SPY) by more than 7 percentage points. A small number of hedge funds were also right about betting on HUYA as the stock returned 44.6% and outperformed the market by an even larger margin.