Did Hedge Funds Drop The Ball On Hubbell Incorporated (HUBB) ?

Our extensive research has shown that imitating the smart money can generate significant returns for retail investors, which is why we track nearly 750 active prominent money managers and analyze their quarterly 13F filings. The stocks that are heavily bought by hedge funds historically outperformed the market, though there is no shortage of high profile failures like hedge funds’ recent losses in Facebook. Let’s take a closer look at what the funds we track think about Hubbell Incorporated (NYSE:HUBB) in this article.

Hubbell Incorporated (NYSE:HUBB) shareholders have witnessed a decrease in activity from the world’s largest hedge funds in recent months. Our calculations also showed that HUBB isn’t among the 30 most popular stocks among hedge funds.

According to most stock holders, hedge funds are assumed to be underperforming, old financial vehicles of the past. While there are more than 8000 funds with their doors open today, Our experts choose to focus on the crème de la crème of this club, approximately 750 funds. Most estimates calculate that this group of people command the majority of the hedge fund industry’s total capital, and by following their matchless investments, Insider Monkey has come up with many investment strategies that have historically defeated Mr. Market. Insider Monkey’s flagship hedge fund strategy outperformed the S&P 500 index by nearly 5 percentage points a year since its inception in May 2014 through early November 2018. We were able to generate large returns even by identifying short candidates. Our portfolio of short stocks lost 27.5% since February 2017 (through March 12th) even though the market was up nearly 25% during the same period. We just shared a list of 6 short targets in our latest quarterly update and they are already down an average of 6% in less than a month. 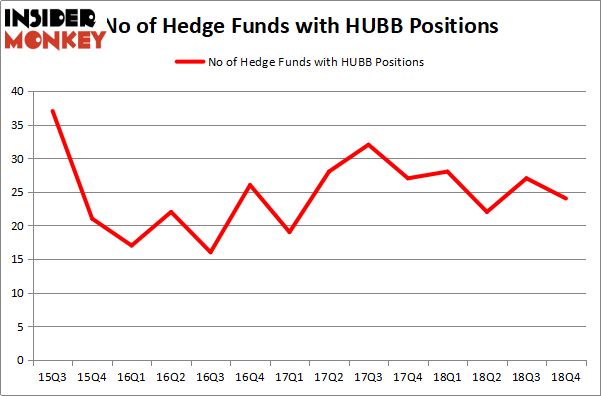 Among these funds, Citadel Investment Group held the most valuable stake in Hubbell Incorporated (NYSE:HUBB), which was worth $115.1 million at the end of the third quarter. On the second spot was Royce & Associates which amassed $92.6 million worth of shares. Moreover, Impax Asset Management, Millennium Management, and Carlson Capital were also bullish on Hubbell Incorporated (NYSE:HUBB), allocating a large percentage of their portfolios to this stock.

Seeing as Hubbell Incorporated (NYSE:HUBB) has witnessed falling interest from the smart money, logic holds that there were a few hedgies that decided to sell off their entire stakes in the third quarter. Intriguingly, Robert Pohly’s Samlyn Capital said goodbye to the largest stake of all the hedgies followed by Insider Monkey, valued at about $45.4 million in stock. Doug Gordon, Jon Hilsabeck and Don Jabro’s fund, Shellback Capital, also said goodbye to its stock, about $35 million worth. These moves are interesting, as aggregate hedge fund interest was cut by 3 funds in the third quarter.

As you can see these stocks had an average of 20.75 hedge funds with bullish positions and the average amount invested in these stocks was $325 million. That figure was $449 million in HUBB’s case. athenahealth, Inc (NASDAQ:ATHN) is the most popular stock in this table. On the other hand bluebird bio Inc (NASDAQ:BLUE) is the least popular one with only 16 bullish hedge fund positions. Hubbell Incorporated (NYSE:HUBB) is not the most popular stock in this group but hedge fund interest is still above average. This is a slightly positive signal but we’d rather spend our time researching stocks that hedge funds are piling on. Our calculations showed that top 15 most popular stocks among hedge funds returned 21.3% through April 8th and outperformed the S&P 500 ETF (SPY) by more than 5 percentage points. Hedge funds were also right about betting on HUBB as the stock returned 27.8% and outperformed the market as well.