Is HMS Holdings Corp. (NASDAQ:HMSY) undervalued? The smart money is taking a pessimistic view. The number of long hedge fund bets decreased by 5 recently. Our calculations also showed that HMSY isn’t among the 30 most popular stocks among hedge funds (view video below).

What have hedge funds been doing with HMS Holdings Corp. (NASDAQ:HMSY)?

At the end of the second quarter, a total of 21 of the hedge funds tracked by Insider Monkey were long this stock, a change of -19% from one quarter earlier. On the other hand, there were a total of 11 hedge funds with a bullish position in HMSY a year ago. With the smart money’s sentiment swirling, there exists an “upper tier” of notable hedge fund managers who were adding to their holdings substantially (or already accumulated large positions). 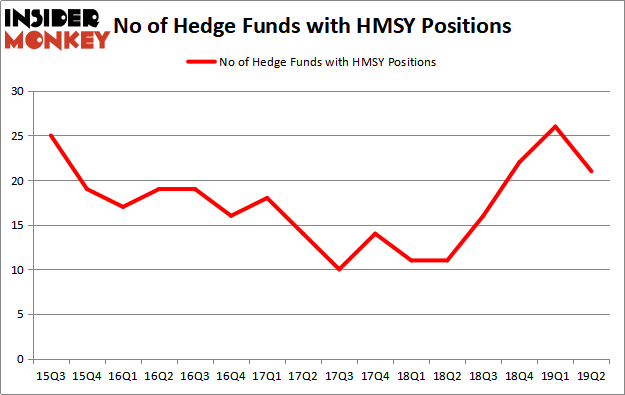 More specifically, Citadel Investment Group was the largest shareholder of HMS Holdings Corp. (NASDAQ:HMSY), with a stake worth $43.9 million reported as of the end of March. Trailing Citadel Investment Group was D E Shaw, which amassed a stake valued at $25.8 million. AQR Capital Management, Marshall Wace LLP, and GLG Partners were also very fond of the stock, giving the stock large weights in their portfolios.

Seeing as HMS Holdings Corp. (NASDAQ:HMSY) has experienced a decline in interest from hedge fund managers, we can see that there was a specific group of funds that elected to cut their full holdings heading into Q3. At the top of the heap, Peter Muller’s PDT Partners cut the biggest investment of all the hedgies tracked by Insider Monkey, totaling an estimated $2.2 million in stock, and Benjamin A. Smith’s Laurion Capital Management was right behind this move, as the fund cut about $0.9 million worth. These transactions are intriguing to say the least, as total hedge fund interest fell by 5 funds heading into Q3.

As you can see these stocks had an average of 14.75 hedge funds with bullish positions and the average amount invested in these stocks was $440 million. That figure was $186 million in HMSY’s case. Iovance Biotherapeutics, Inc. (NASDAQ:IOVA) is the most popular stock in this table. On the other hand Hamilton Lane Incorporated (NASDAQ:HLNE) is the least popular one with only 6 bullish hedge fund positions. HMS Holdings Corp. (NASDAQ:HMSY) is not the most popular stock in this group but hedge fund interest is still above average. Our calculations showed that top 20 most popular stocks among hedge funds returned 24.4% in 2019 through September 30th and outperformed the S&P 500 ETF (SPY) by 4 percentage points. Hedge funds were also right about betting on HMSY as the stock returned 6.4% during the third quarter and outperformed the market. Hedge funds were rewarded for their relative bullishness.