The fourth quarter was a rough one for most investors, as fears of a rising interest rate environment in the U.S, a trade war with China, and a more or less stagnant Europe, weighed heavily on the minds of investors. Both the S&P 500 and Russell 2000 sank as a result, with the Russell 2000, which is composed of smaller companies, being hit especially hard. This was primarily due to hedge funds, which are big supporters of small-cap stocks, pulling some of their capital out of the volatile markets during this time. Let’s look at how this market volatility affected the sentiment of hedge funds towards Hertz Global Holdings, Inc. (NYSE:HTZ), and what that likely means for the prospects of the company and its stock.

Hertz Global Holdings, Inc. (NYSE:HTZ) was in 23 hedge funds’ portfolios at the end of December. HTZ has experienced a decrease in enthusiasm from smart money in recent months. There were 26 hedge funds in our database with HTZ holdings at the end of the previous quarter. Our calculations also showed that htz isn’t among the 30 most popular stocks among hedge funds.

What does the smart money think about Hertz Global Holdings, Inc. (NYSE:HTZ)? 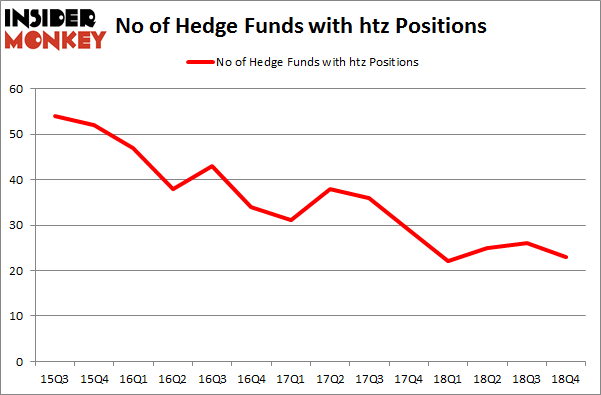 Among these funds, Icahn Capital LP held the most valuable stake in Hertz Global Holdings, Inc. (NYSE:HTZ), which was worth $399.5 million at the end of the fourth quarter. On the second spot was PAR Capital Management which amassed $80.4 million worth of shares. Moreover, GAMCO Investors, D E Shaw, and Renaissance Technologies were also bullish on Hertz Global Holdings, Inc. (NYSE:HTZ), allocating a large percentage of their portfolios to this stock.

Because Hertz Global Holdings, Inc. (NYSE:HTZ) has faced a decline in interest from hedge fund managers, logic holds that there lies a certain “tier” of money managers that elected to cut their full holdings by the end of the third quarter. At the top of the heap, Dmitry Balyasny’s Balyasny Asset Management sold off the biggest investment of the 700 funds tracked by Insider Monkey, comprising about $6.1 million in stock, and Cliff Asness’s AQR Capital Management was right behind this move, as the fund sold off about $2.1 million worth. These transactions are interesting, as aggregate hedge fund interest was cut by 3 funds by the end of the third quarter.

As you can see these stocks had an average of 10 hedge funds with bullish positions and the average amount invested in these stocks was $45 million. That figure was $783 million in HTZ’s case. Tahoe Resources Inc (NYSE:TAHO) is the most popular stock in this table. On the other hand Tompkins Financial Corporation (NYSEAMEX:TMP) is the least popular one with only 4 bullish hedge fund positions. Compared to these stocks Hertz Global Holdings, Inc. (NYSE:HTZ) is more popular among hedge funds. Our calculations showed that top 15 most popular stocks) among hedge funds returned 24.2% through April 22nd and outperformed the S&P 500 ETF (SPY) by more than 7 percentage points. Hedge funds were also right about betting on HTZ as the stock returned 28.1% and outperformed the market by an even larger margin. Hedge funds were clearly right about piling into this stock relative to other stocks with similar market capitalizations.