Hedge fund interest in Grupo Aeroportuario del Centro Norte, S. A. B. de C. V. (NASDAQ:OMAB) shares was flat at the end of last quarter. This is usually a negative indicator. At the end of this article we will also compare OMAB to other stocks including Washington Real Estate Investment Trust (NYSE:WRE), NetScout Systems, Inc. (NASDAQ:NTCT), and Pattern Energy Group Inc (NASDAQ:PEGI) to get a better sense of its popularity.

In the financial world there are several formulas investors employ to grade publicly traded companies. A pair of the less known formulas are hedge fund and insider trading indicators. Our experts have shown that, historically, those who follow the top picks of the elite fund managers can beat the S&P 500 by a superb amount (see the details here).

What does the smart money think about Grupo Aeroportuario del Centro Norte, S. A. B. de C. V. (NASDAQ:OMAB)?

At Q4’s end, a total of 5 of the hedge funds tracked by Insider Monkey were bullish on this stock, a change of 0% from one quarter earlier. Below, you can check out the change in hedge fund sentiment towards OMAB over the last 14 quarters. With hedgies’ capital changing hands, there exists a few noteworthy hedge fund managers who were adding to their holdings substantially (or already accumulated large positions). 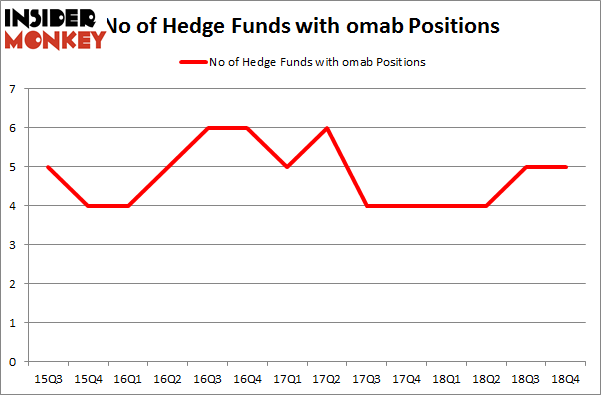 More specifically, Renaissance Technologies was the largest shareholder of Grupo Aeroportuario del Centro Norte, S. A. B. de C. V. (NASDAQ:OMAB), with a stake worth $22.7 million reported as of the end of September. Trailing Renaissance Technologies was Millennium Management, which amassed a stake valued at $3.4 million. Driehaus Capital, Bailard Inc, and Marshall Wace LLP were also very fond of the stock, giving the stock large weights in their portfolios.

Judging by the fact that Grupo Aeroportuario del Centro Norte, S. A. B. de C. V. (NASDAQ:OMAB) has experienced declining sentiment from the aggregate hedge fund industry, we can see that there exists a select few money managers that decided to sell off their full holdings last quarter. Interestingly, J. Alan Reid, Jr.’s Forward Management dropped the biggest position of the 700 funds followed by Insider Monkey, valued at close to $0.8 million in stock. Peter Rathjens, Bruce Clarke and John Campbell’s fund, Arrowstreet Capital, also cut its stock, about $0.5 million worth. These bearish behaviors are important to note, as total hedge fund interest stayed the same (this is a bearish signal in our experience).

As you can see these stocks had an average of 15.75 hedge funds with bullish positions and the average amount invested in these stocks was $140 million. That figure was $29 million in OMAB’s case. Groupon Inc (NASDAQ:GRPN) is the most popular stock in this table. On the other hand Pattern Energy Group Inc (NASDAQ:PEGI) is the least popular one with only 11 bullish hedge fund positions. Compared to these stocks Grupo Aeroportuario del Centro Norte, S. A. B. de C. V. (NASDAQ:OMAB) is even less popular than PEGI. Hedge funds clearly dropped the ball on OMAB as the stock delivered strong returns, though hedge funds’ consensus picks still generated respectable returns. Our calculations showed that top 15 most popular stocks) among hedge funds returned 24.2% through April 22nd and outperformed the S&P 500 ETF (SPY) by more than 7 percentage points. A small number of hedge funds were also right about betting on OMAB as the stock returned 28.7% and outperformed the market by an even larger margin.