Did Hedge Funds Drop The Ball On Griffon Corporation (GFF) ?

We at Insider Monkey have gone over 700 13F filings that hedge funds and prominent investors are required to file by the SEC The 13F filings show the funds’ and investors’ portfolio positions as of December 31st. In this article, we look at what those funds think of Griffon Corporation (NYSE:GFF) based on that data.

Griffon Corporation (NYSE:GFF) was in 14 hedge funds’ portfolios at the end of the fourth quarter of 2018. GFF has experienced a decrease in hedge fund interest in recent months. There were 15 hedge funds in our database with GFF holdings at the end of the previous quarter. Our calculations also showed that gff isn’t among the 30 most popular stocks among hedge funds.

How have hedgies been trading Griffon Corporation (NYSE:GFF)?

At the end of the fourth quarter, a total of 14 of the hedge funds tracked by Insider Monkey were bullish on this stock, a change of -7% from the previous quarter. By comparison, 7 hedge funds held shares or bullish call options in GFF a year ago. With hedge funds’ sentiment swirling, there exists a few noteworthy hedge fund managers who were boosting their stakes significantly (or already accumulated large positions). 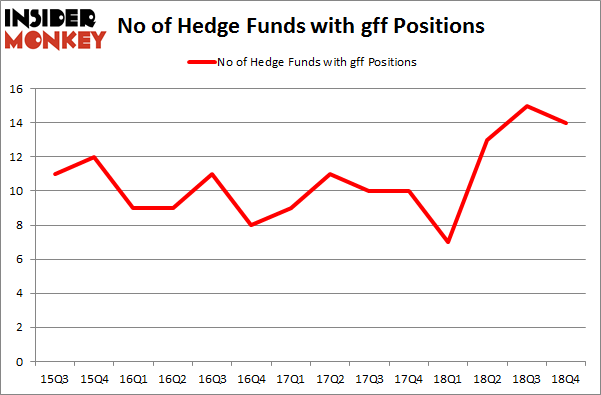 Of the funds tracked by Insider Monkey, Mario Gabelli’s GAMCO Investors has the number one position in Griffon Corporation (NYSE:GFF), worth close to $56.4 million, accounting for 0.5% of its total 13F portfolio. The second most bullish fund manager is Royce & Associates, led by Chuck Royce, holding a $10.3 million position; the fund has 0.1% of its 13F portfolio invested in the stock. Some other hedge funds and institutional investors that are bullish comprise Paul Marshall and Ian Wace’s Marshall Wace LLP, D. E. Shaw’s D E Shaw and Ken Griffin’s Citadel Investment Group.

Judging by the fact that Griffon Corporation (NYSE:GFF) has faced bearish sentiment from hedge fund managers, logic holds that there was a specific group of funds that decided to sell off their full holdings heading into Q3. Intriguingly, David Rodriguez-Fraile’s BlueMar Capital Management said goodbye to the largest position of the “upper crust” of funds tracked by Insider Monkey, totaling about $1 million in stock, and Matthew Halbower’s Pentwater Capital Management was right behind this move, as the fund dumped about $0.4 million worth. These bearish behaviors are intriguing to say the least, as aggregate hedge fund interest dropped by 1 funds heading into Q3.

As you can see these stocks had an average of 11.75 hedge funds with bullish positions and the average amount invested in these stocks was $64 million. That figure was $78 million in GFF’s case. Boot Barn Holdings Inc (NYSE:BOOT) is the most popular stock in this table. On the other hand Puxin Limited (NYSE:NEW) is the least popular one with only 4 bullish hedge fund positions. Griffon Corporation (NYSE:GFF) is not the most popular stock in this group but hedge fund interest is still above average. Our calculations showed that top 15 most popular stocks) among hedge funds returned 24.2% through April 22nd and outperformed the S&P 500 ETF (SPY) by more than 7 percentage points. Hedge funds were also right about betting on GFF as the stock returned 85.4% and outperformed the market by an even larger margin. Hedge funds were rewarded for their relative bullishness.