Did Hedge Funds Drop The Ball On GreenSky, Inc. (GSKY) ?

Legendary investors such as Jeffrey Talpins and Seth Klarman earn enormous amounts of money for themselves and their investors by doing in-depth research on small-cap stocks that big brokerage houses don’t publish. Small cap stocks -especially when they are screened well- can generate substantial outperformance versus a boring index fund. That’s why we analyze the activity of those elite funds in these small-cap stocks. In the following paragraphs, we analyze GreenSky, Inc. (NASDAQ:GSKY) from the perspective of those elite funds.

Hedge fund interest in GreenSky, Inc. (NASDAQ:GSKY) shares was flat at the end of last quarter. This is usually a negative indicator. The level and the change in hedge fund popularity aren’t the only variables you need to analyze to decipher hedge funds’ perspectives. A stock may witness a boost in popularity but it may still be less popular than similarly priced stocks. That’s why at the end of this article we will examine companies such as Deluxe Corporation (NYSE:DLX), Four Corners Property Trust, Inc. (NYSE:FCPT), and GCP Applied Technologies Inc. (NYSE:GCP) to gather more data points. 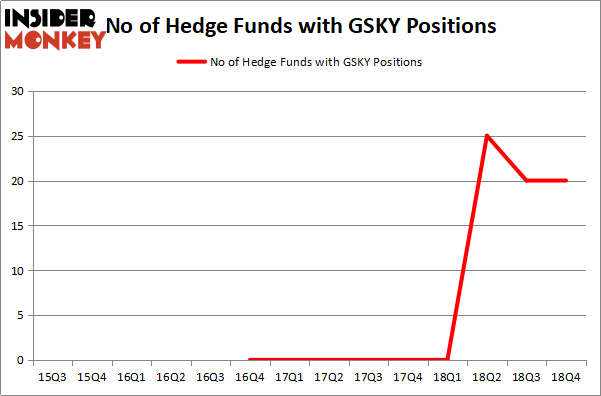 Among these funds, Two Sigma Advisors held the most valuable stake in GreenSky, Inc. (NASDAQ:GSKY), which was worth $4.9 million at the end of the fourth quarter. On the second spot was Marshall Wace LLP which amassed $4.1 million worth of shares. Moreover, D E Shaw, Scoggin, and Harvest Capital Strategies were also bullish on GreenSky, Inc. (NASDAQ:GSKY), allocating a large percentage of their portfolios to this stock.

Because GreenSky, Inc. (NASDAQ:GSKY) has experienced falling interest from the smart money, we can see that there was a specific group of fund managers that slashed their positions entirely by the end of the third quarter. Interestingly, Christopher James’s Partner Fund Management said goodbye to the largest stake of the 700 funds monitored by Insider Monkey, totaling about $36.7 million in stock, and Robert Pohly’s Samlyn Capital was right behind this move, as the fund dumped about $17.4 million worth. These moves are interesting, as total hedge fund interest stayed the same (this is a bearish signal in our experience).

As you can see these stocks had an average of 16.5 hedge funds with bullish positions and the average amount invested in these stocks was $167 million. That figure was $33 million in GSKY’s case. Deluxe Corporation (NYSE:DLX) is the most popular stock in this table. On the other hand Four Corners Property Trust, Inc. (NYSE:FCPT) is the least popular one with only 13 bullish hedge fund positions. GreenSky, Inc. (NASDAQ:GSKY) is not the most popular stock in this group but hedge fund interest is still above average. Our calculations showed that top 15 most popular stocks) among hedge funds returned 24.2% through April 22nd and outperformed the S&P 500 ETF (SPY) by more than 7 percentage points. Hedge funds were also right about betting on GSKY as the stock returned 61% and outperformed the market by an even larger margin. Hedge funds were rewarded for their relative bullishness.