Out of thousands of stocks that are currently traded on the market, it is difficult to identify those that will really generate strong returns. Hedge funds and institutional investors spend millions of dollars on analysts with MBAs and PhDs, who are industry experts and well connected to other industry and media insiders on top of that. Individual investors can piggyback the hedge funds employing these talents and can benefit from their vast resources and knowledge in that way. We analyze quarterly 13F filings of nearly 750 hedge funds and, by looking at the smart money sentiment that surrounds a stock, we can determine whether it has the potential to beat the market over the long-term. Therefore, let’s take a closer look at what smart money thinks about Gossamer Bio, Inc. (NASDAQ:GOSS).

Is Gossamer Bio, Inc. (NASDAQ:GOSS) worth your attention right now? Investors who are in the know are reducing their bets on the stock. The number of long hedge fund positions decreased by 2 recently. Our calculations also showed that GOSS isn’t among the 30 most popular stocks among hedge funds (click for Q3 rankings and see the video below for Q2 rankings). GOSS was in 9 hedge funds’ portfolios at the end of the third quarter of 2019. There were 11 hedge funds in our database with GOSS positions at the end of the previous quarter.

In the eyes of most shareholders, hedge funds are assumed to be worthless, outdated financial vehicles of years past. While there are more than 8000 funds with their doors open at present, We choose to focus on the elite of this club, about 750 funds. These money managers handle the majority of the hedge fund industry’s total capital, and by observing their unrivaled investments, Insider Monkey has identified a few investment strategies that have historically outperformed Mr. Market. Insider Monkey’s flagship short hedge fund strategy outperformed the S&P 500 short ETFs by around 20 percentage points per annum since its inception in May 2014. Our portfolio of short stocks lost 27.8% since February 2017 (through November 21st) even though the market was up more than 39% during the same period. We just shared a list of 7 short targets in our latest quarterly update .

We leave no stone unturned when looking for the next great investment idea. For example Europe is set to become the world’s largest cannabis market, so we check out this European marijuana stock pitch. One of the most bullish analysts in America just put his money where his mouth is. He says, “I’m investing more today than I did back in early 2009.” So we check out his pitch. We read hedge fund investor letters and listen to stock pitches at hedge fund conferences. We also rely on the best performing hedge funds‘ buy/sell signals. We’re going to take a look at the new hedge fund action regarding Gossamer Bio, Inc. (NASDAQ:GOSS).

At Q3’s end, a total of 9 of the hedge funds tracked by Insider Monkey held long positions in this stock, a change of -18% from the second quarter of 2019. Below, you can check out the change in hedge fund sentiment towards GOSS over the last 17 quarters. So, let’s see which hedge funds were among the top holders of the stock and which hedge funds were making big moves. 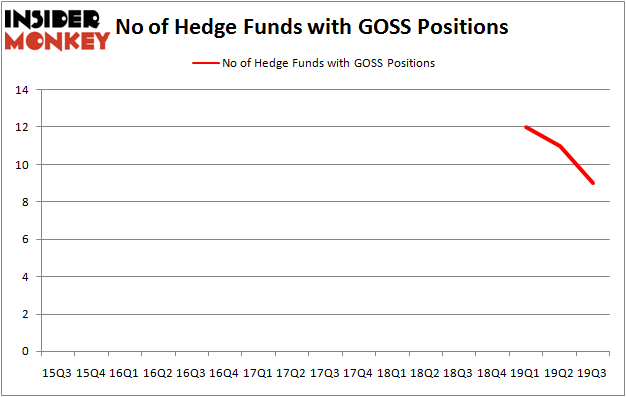 When looking at the institutional investors followed by Insider Monkey, Lei Zhang’s Hillhouse Capital Management has the largest position in Gossamer Bio, Inc. (NASDAQ:GOSS), worth close to $99.3 million, comprising 1.4% of its total 13F portfolio. The second largest stake is held by Seth Klarman of Baupost Group, with a $15.9 million position; the fund has 0.2% of its 13F portfolio invested in the stock. Some other hedge funds and institutional investors that hold long positions consist of Ken Griffin’s Citadel Investment Group, and Bihua Chen’s Cormorant Asset Management. In terms of the portfolio weights assigned to each position Samsara BioCapital allocated the biggest weight to Gossamer Bio, Inc. (NASDAQ:GOSS), around 4.3% of its 13F portfolio. EcoR1 Capital is also relatively very bullish on the stock, dishing out 1.7 percent of its 13F equity portfolio to GOSS.

Due to the fact that Gossamer Bio, Inc. (NASDAQ:GOSS) has witnessed declining sentiment from the aggregate hedge fund industry, it’s safe to say that there lies a certain “tier” of fund managers who sold off their full holdings heading into Q4. At the top of the heap, Oleg Nodelman’s EcoR1 Capital said goodbye to the largest investment of the “upper crust” of funds tracked by Insider Monkey, worth about $17.1 million in stock. Steve Cohen’s fund, Point72 Asset Management, also dropped its stock, about $2.7 million worth. These transactions are important to note, as total hedge fund interest was cut by 2 funds heading into Q4.

As you can see these stocks had an average of 10.75 hedge funds with bullish positions and the average amount invested in these stocks was $52 million. That figure was $162 million in GOSS’s case. Opera Limited (NASDAQ:OPRA) is the most popular stock in this table. On the other hand TriCo Bancshares (NASDAQ:TCBK) is the least popular one with only 9 bullish hedge fund positions. Compared to these stocks Gossamer Bio, Inc. (NASDAQ:GOSS) is even less popular than TCBK. Hedge funds clearly dropped the ball on GOSS as the stock delivered strong returns, though hedge funds’ consensus picks still generated respectable returns. Our calculations showed that top 20 most popular stocks among hedge funds returned 37.4% in 2019 through the end of November and outperformed the S&P 500 ETF (SPY) by 9.9 percentage points. A small number of hedge funds were also right about betting on GOSS as the stock returned 51.9% during the fourth quarter (through the end of November) and outperformed the market by an even larger margin.

Is Viking Therapeutics, Inc. (VKTX) A Good Stock To Buy?
Monthly Newsletter Strategy
Download a free copy of our newsletter and see the details inside!
Hedge Fund Resource Center
Related News
10 Countries with the Highest Coffee Consumption in the World 10 Stocks That Went Up During The 2008 Crash 10 Movies About Amnesia on Netflix
Billionaire Hedge Funds