Is GDS Holdings Limited (NASDAQ:GDS) a good equity to bet on right now? We like to check what the smart money thinks first before doing extensive research. Although there have been several high profile failed hedge fund picks, the consensus picks among hedge fund investors have historically outperformed the market after adjusting for known risk attributes. It’s not surprising given that hedge funds have access to better information and more resources to find the winners in the stock market.

Is GDS Holdings Limited (NASDAQ:GDS) worth your attention right now? Hedge funds are in a pessimistic mood. The number of long hedge fund bets decreased by 1 in recent months. Our calculations also showed that GDS isn’t among the 30 most popular stocks among hedge funds. GDS was in 25 hedge funds’ portfolios at the end of December. There were 26 hedge funds in our database with GDS positions at the end of the previous quarter.

How have hedgies been trading GDS Holdings Limited (NASDAQ:GDS)? 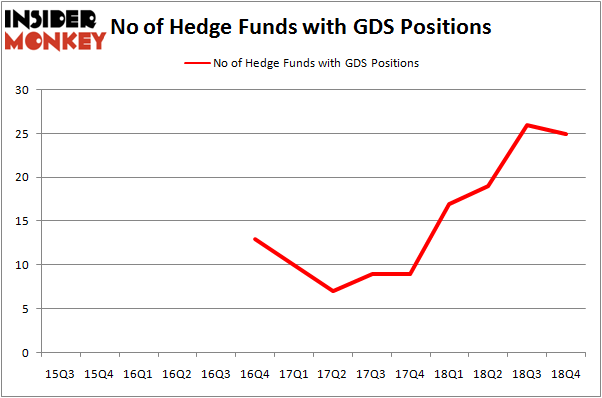 When looking at the institutional investors followed by Insider Monkey, Joel Ramin’s 12 West Capital Management has the largest position in GDS Holdings Limited (NASDAQ:GDS), worth close to $247.4 million, amounting to 25.5% of its total 13F portfolio. Sitting at the No. 2 spot is Bridger Management, led by Roberto Mignone, holding a $32.1 million position; the fund has 2.7% of its 13F portfolio invested in the stock. Remaining peers that are bullish include Ted Kang’s Kylin Management, Louis Bacon’s Moore Global Investments and Phill Gross and Robert Atchinson’s Adage Capital Management.

Because GDS Holdings Limited (NASDAQ:GDS) has experienced bearish sentiment from the aggregate hedge fund industry, we can see that there was a specific group of hedge funds who were dropping their entire stakes last quarter. It’s worth mentioning that Jason Karp’s Tourbillon Capital Partners dropped the largest stake of the “upper crust” of funds followed by Insider Monkey, comprising about $42.1 million in stock. Alec Litowitz and Ross Laser’s fund, Magnetar Capital, also sold off its stock, about $5.7 million worth. These moves are interesting, as total hedge fund interest dropped by 1 funds last quarter.

Let’s now take a look at hedge fund activity in other stocks – not necessarily in the same industry as GDS Holdings Limited (NASDAQ:GDS) but similarly valued. We will take a look at Yelp Inc (NYSE:YELP), Evercore Inc. (NYSE:EVR), Antero Resources Corp (NYSE:AR), and B2Gold Corp (NYSE:BTG). This group of stocks’ market caps are similar to GDS’s market cap.

As you can see these stocks had an average of 21.75 hedge funds with bullish positions and the average amount invested in these stocks was $476 million. That figure was $426 million in GDS’s case. Yelp Inc (NYSE:YELP) is the most popular stock in this table. On the other hand B2Gold Corp (NYSE:BTG) is the least popular one with only 17 bullish hedge fund positions. Compared to these stocks GDS Holdings Limited (NASDAQ:GDS) is more popular among hedge funds. Our calculations showed that top 15 most popular stocks) among hedge funds returned 24.2% through April 22nd and outperformed the S&P 500 ETF (SPY) by more than 7 percentage points. Hedge funds were also right about betting on GDS as the stock returned 69% and outperformed the market by an even larger margin. Hedge funds were clearly right about piling into this stock relative to other stocks with similar market capitalizations.