Did Hedge Funds Drop The Ball On Forestar Group Inc. (FOR) ?

Hedge funds are not perfect. They have their bad picks just like everyone else. Facebook, a stock hedge funds have loved, lost nearly 40% of its value at one point in 2018. Although hedge funds are not perfect, their consensus picks do deliver solid returns, however. Our data show the top 15 S&P 500 stocks among hedge funds at the end of December 2018 yielded an average return of 19.7% year-to-date, vs. a gain of 13.1% for the S&P 500 Index. Because hedge funds have a lot of resources and their consensus picks do well, we pay attention to what they think. In this article, we analyze what the elite funds think of Forestar Group Inc. (NYSE:FOR).

Is Forestar Group Inc. (NYSE:FOR) a bargain? Money managers are taking an optimistic view. The number of bullish hedge fund positions went up by 1 recently. Our calculations also showed that FOR isn’t among the 30 most popular stocks among hedge funds.

At the end of the fourth quarter, a total of 6 of the hedge funds tracked by Insider Monkey were bullish on this stock, a change of 20% from one quarter earlier. Below, you can check out the change in hedge fund sentiment towards FOR over the last 14 quarters. With hedgies’ capital changing hands, there exists an “upper tier” of noteworthy hedge fund managers who were upping their holdings meaningfully (or already accumulated large positions). 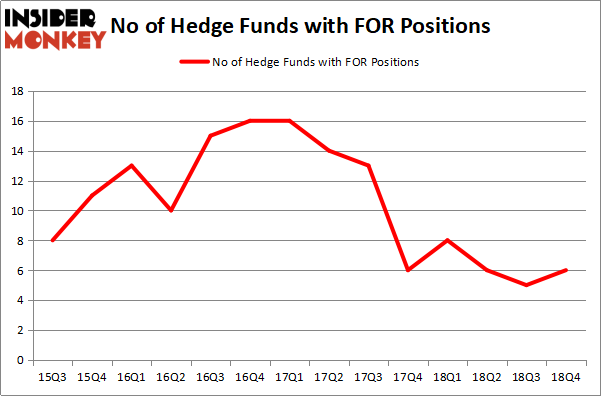 The largest stake in Forestar Group Inc. (NYSE:FOR) was held by Long Pond Capital, which reported holding $53.7 million worth of stock at the end of December. It was followed by Capital Growth Management with a $1.9 million position. Other investors bullish on the company included Marshall Wace LLP, Millennium Management, and Royce & Associates.

With a general bullishness amongst the heavyweights, key hedge funds have jumped into Forestar Group Inc. (NYSE:FOR) headfirst. Springbok Capital, managed by Gavin Saitowitz and Cisco J. del Valle, initiated the biggest position in Forestar Group Inc. (NYSE:FOR). Springbok Capital had $2 million invested in the company at the end of the quarter. Ken Heebner’s Capital Growth Management also made a $1.9 million investment in the stock during the quarter. The other funds with brand new FOR positions are Ken Griffin’s Citadel Investment Group, Paul Marshall and Ian Wace’s Marshall Wace LLP, and Israel Englander’s Millennium Management.

As you can see these stocks had an average of 11.25 hedge funds with bullish positions and the average amount invested in these stocks was $36 million. That figure was $57 million in FOR’s case. Echo Global Logistics, Inc. (NASDAQ:ECHO) is the most popular stock in this table. On the other hand Bank of Marin Bancorp (NASDAQ:BMRC) is the least popular one with only 6 bullish hedge fund positions. Compared to these stocks Forestar Group Inc. (NYSE:FOR) is even less popular than BMRC. Hedge funds clearly dropped the ball on FOR as the stock delivered strong returns, though hedge funds’ consensus picks still generated respectable returns. Our calculations showed that top 15 most popular stocks) among hedge funds returned 24.2% through April 22nd and outperformed the S&P 500 ETF (SPY) by more than 7 percentage points. A small number of hedge funds were also right about betting on FOR as the stock returned 32% and outperformed the market by an even larger margin.