Is ForeScout Technologies, Inc. (NASDAQ:FSCT) a good stock to buy right now? We at Insider Monkey like to examine what billionaires and hedge funds think of a company before spending days of research on it. Given their 2 and 20 payment structure, hedge funds have more incentives and resources than the average investor. The funds have access to expert networks and get tips from industry insiders. They also have numerous Ivy League graduates and MBAs. Like everyone else, hedge funds perform miserably at times, but their consensus picks have historically outperformed the market after risk adjustments.

ForeScout Technologies, Inc. (NASDAQ:FSCT) was in 18 hedge funds’ portfolios at the end of the second quarter of 2019. FSCT shareholders have witnessed a decrease in activity from the world’s largest hedge funds lately. There were 23 hedge funds in our database with FSCT positions at the end of the previous quarter. Our calculations also showed that FSCT isn’t among the 30 most popular stocks among hedge funds (see the video below). 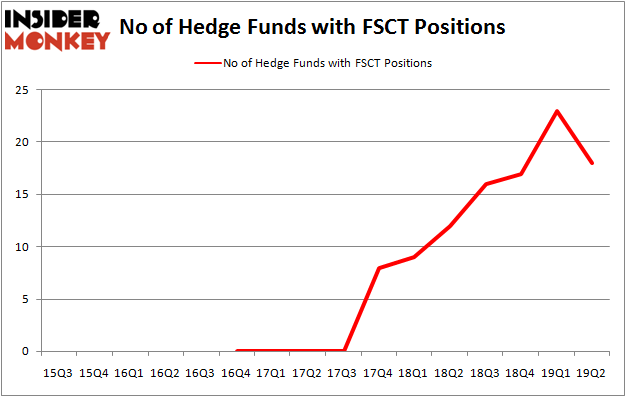 How have hedgies been trading ForeScout Technologies, Inc. (NASDAQ:FSCT)?

At the end of the second quarter, a total of 18 of the hedge funds tracked by Insider Monkey were bullish on this stock, a change of -22% from the previous quarter. Below, you can check out the change in hedge fund sentiment towards FSCT over the last 16 quarters. With hedge funds’ capital changing hands, there exists an “upper tier” of noteworthy hedge fund managers who were boosting their holdings meaningfully (or already accumulated large positions).

According to publicly available hedge fund and institutional investor holdings data compiled by Insider Monkey, Jericho Capital Asset Management, managed by Josh Resnick, holds the largest position in ForeScout Technologies, Inc. (NASDAQ:FSCT). Jericho Capital Asset Management has a $113.2 million position in the stock, comprising 5% of its 13F portfolio. Sitting at the No. 2 spot is Corvex Capital, managed by Keith Meister, which holds a $16.4 million position; the fund has 0.6% of its 13F portfolio invested in the stock. Some other peers with similar optimism contain Thomas Ellis and Todd Hammer’s North Run Capital, John Overdeck and David Siegel’s Two Sigma Advisors and Rishi Bajaj, Toby Symonds, and Steve Tesoriere’s Altai Capital.

Because ForeScout Technologies, Inc. (NASDAQ:FSCT) has witnessed declining sentiment from hedge fund managers, logic holds that there was a specific group of hedge funds who were dropping their positions entirely heading into Q3. Interestingly, Louis Bacon’s Moore Global Investments cut the largest stake of all the hedgies tracked by Insider Monkey, valued at about $12.2 million in stock, and Israel Englander’s Millennium Management was right behind this move, as the fund sold off about $9.4 million worth. These moves are intriguing to say the least, as aggregate hedge fund interest dropped by 5 funds heading into Q3.

As you can see these stocks had an average of 13 hedge funds with bullish positions and the average amount invested in these stocks was $90 million. That figure was $192 million in FSCT’s case. Southwestern Energy Company (NYSE:SWN) is the most popular stock in this table. On the other hand FBL Financial Group, Inc. (NYSE:FFG) is the least popular one with only 7 bullish hedge fund positions. ForeScout Technologies, Inc. (NASDAQ:FSCT) is not the most popular stock in this group but hedge fund interest is still above average. Our calculations showed that top 20 most popular stocks among hedge funds returned 24.4% in 2019 through September 30th and outperformed the S&P 500 ETF (SPY) by 4 percentage points. Hedge funds were also right about betting on FSCT as the stock returned 12% during the third quarter and outperformed the market. Hedge funds were rewarded for their relative bullishness.